Peloton might not turn a profit for five years, but it’s still a buy, according to Baird.

On Wednesday the firm initiated coverage on the stock with an outperform rating saying the exercise bike company has “created a better fitness model providing premium content via a vertically integrated digital platform.” Analyst Jonathan Komp also established a $28 price target, which is about 22% higher than where the stock is currently trading.

Peloton was one of the most widely-anticipated IPOs of the year, but since going public just shy of two weeks ago the stock has shed 20%. And Peloton is not the the only company to falter since going public this year. High-profile names like Uber, Lyft and SmileDirectClub are all trading in the red, and following the WeWork IPO debacle, the Street is becoming less forgiving to companies that do not turn a profit — like Peloton.

“I feel like we’re six or seven different companies in one,” Peloton CEO John Foley told CNBC, but some have ridiculed the company after it claimed to be a “technology, media, software, product, experience, fitness, design, retail, apparel [and] logistics” company in its prospectus. The timing of its IPO was also somewhat unfortunate in that it coincided with many on the Street calling out WeWork for claiming to be a tech, rather than real estate, company.

But Komp believes that investors need to approach Peloton with a longer-term time horizon in mind given its loyal user base and growth prospects. 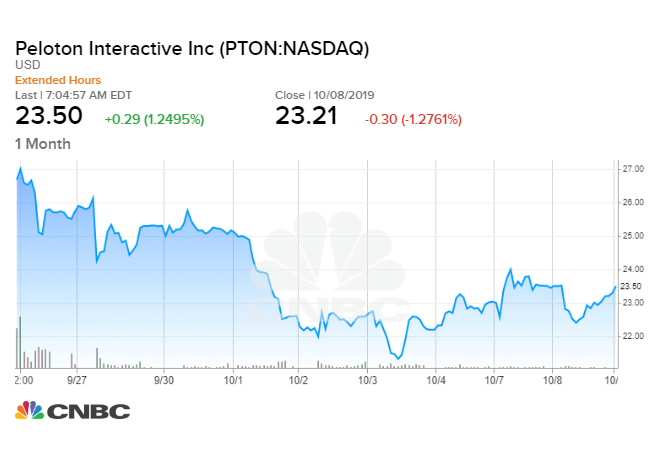 “Key satisfaction/engagement measures are very positive and we see a sizable potential market. While achieving GAAP profitability may prove difficult over the next ~5 years due to investments, PTON possesses substantial long-term sales/profit upside,” he said in a note to clients.

He acknowledges that the IPO was “disappointing,” but has a “positive outlook” for the company, especially if it delivers “strong early results.” His bottom line is that it was a “broken IPO,” but “not a broken company.”

Peloton shares were up more than 1% premarket on Wednesday.

Disclosure: Comcast, which owns CNBC’s parent company NBCUniversal, is an investor in Peloton.