A FedEx employee loads up deliveries in San Francisco.

But FedEx’s second-quarter results were so bad — the profit decline so steep — that such severe language is not only justified, but it wouldn’t be surprising to see an activist investor build a stake in the global shipper, one notable analyst proposed.

“Real simply, FDX reported an awful quarter and unlike 1Q20, this one doesn’t look like it can be pinned on ‘Macro,'” Gordon Haskett analyst Don Bilson wrote Wednesday. “Instead, this looks more like a good old-fashioned face plant and by the look of things right now, FDX may earn less than $10 this year.”

That would represent a stunning reversal from earlier this year, when analysts were expecting fiscal 2020 earnings closer to $18 a share, he wrote.

But that could be the case if FedEx, which on Tuesday reported a 40% year-over-year decline in profit and a 3% fall in revenue, doesn’t correct its current course. A worldwide fall in its staple air shipments business combined with an acceleration in residential deliveries have both undermine revenues and hiked costs.

The damage is slowly being magnified as e-commerce goliath Amazon transitions from a FedEx customer to a competitor, complete with its own warehousing and a suburban armada of delivery vans. The stock fell more than 9% on Wednesday following its disappointing second-quarter earnings, bringing its year-to-date slide to more than 8%.

Rival UPS is up 21% this year while the broader stock market is up a whopping 27%. 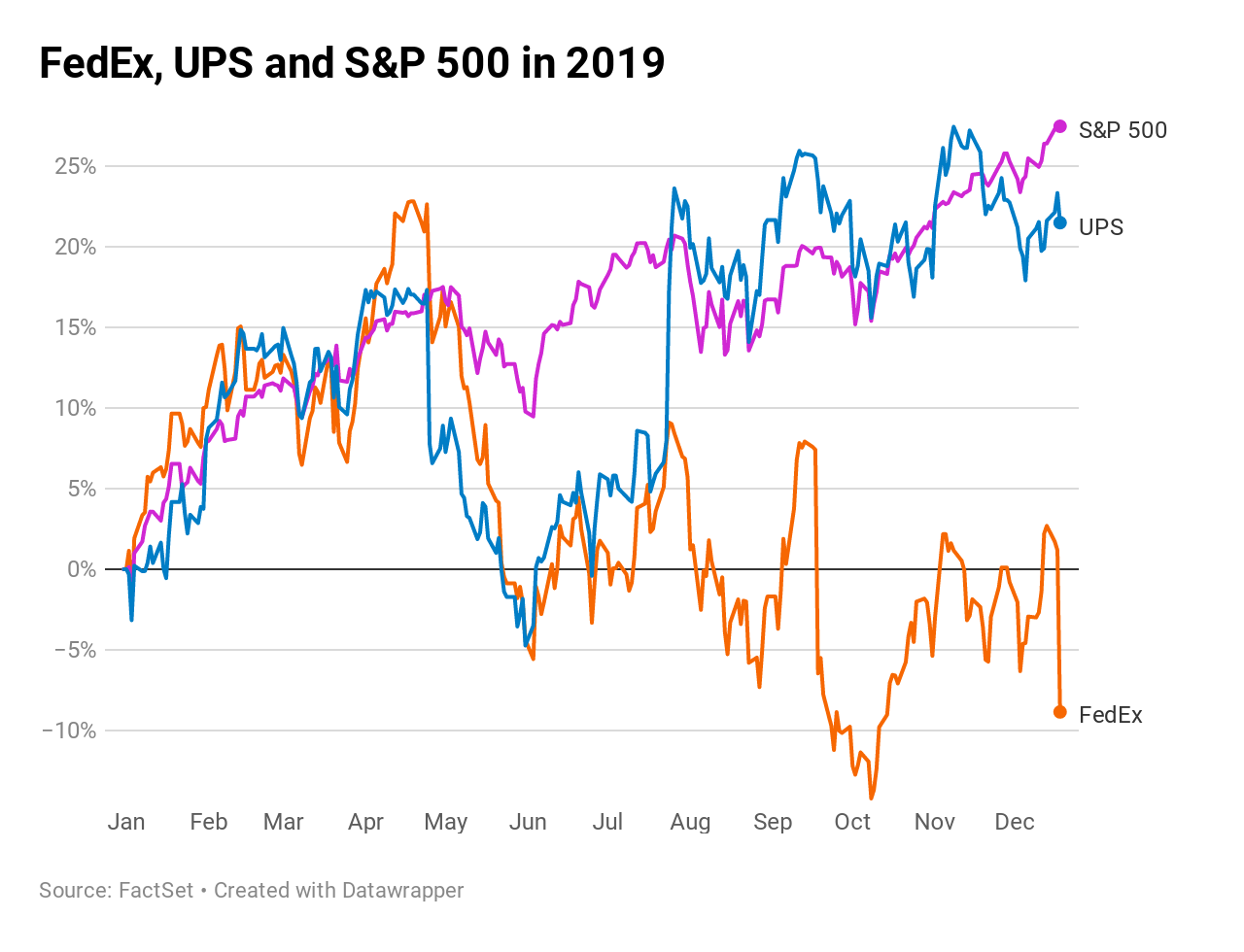 “The quarter just ended as an anomaly because of the compressed shipping season before Christmas necessitating a significant bow wave of expenses to handle volumes that will largely fall in our third fiscal quarter,” FedEx Chairman and Chief Executive Fred Smith said on a conference call.

“This quarter has seen significant effects on the industrial economy due to continuing trade disputes, including reductions in international air freight and tepid, at best, B2B domestic parcel and freight shipping,” he added.

But as the number of disappointing quarters grows, FedEx could find itself at risk of an attack by an activist investor in a bid to shake up management, Bilson warned clients.

Activist investors like Carl Icahn or Paul Singer take stakes in what they believe are undervalued or underperforming companies and then push for changes to the business. Such demands can range from mixing up corporate strategy to replacing management teams and board members.

Calls for management change or board replacement can be especially fierce toward those whose tenure spans decades. Smith founded FedEx in 1971 and serves as both the company’s chairman and chief executive.

“With each passing quarter and one miss after another, it’s getting tougher to keep giving Fred Smith a pass,” Bilson wrote.

“He turned 75 this past August and it’s been our feeling that no ‘activist’ was going to go down to Memphis and tell Smith what to do with the company he built from scratch,” the analyst continued. “We’ve lost some conviction in that thought over the past few quarters and we’ve now tossed it out the door as we no longer see Smith as being bullet-proof.”

Bilson himself has a bit of a track record when it comes to sniffing out big investors’ next moves. The analyst correctly speculated that Icahn was building a stake in HP via an options trade. He also foresaw that Occidental was receiving help from Warren Buffett in its deal with Anadarko.