Home
Stocks
Another theory on why stocks are under pressure lately: The 'Warren correction'
Prev Article Next Article

There’s a correlation between recent weakness in the stock market — led by certain sectors — and Elizabeth Warren’s surge in the polls, according to some analysts and strategists on Wall Street.

One banking analyst, Oppenheimer’s Chris Kotowski, went so far as to title his latest research note “The Warren Correction,” where he pointed out that his sector is down significantly from its highs in the last month, and suggests that Warren’s growing momentum could be a factor behind the recent weakness. The Financial Select Sector SPDR Fund and the SPDR S&P Regional Banking ETF are both down 4% this month, while the S&P 500 is off by more than 2%.

Jefferies biotech analyst Michael Yee wrote that “Elizabeth Warren continues to add uncertainty through the big November 2020 election,” and when it comes to energy, Mizuho’s Paul Sankey believes that “a new overhang has developed for this maligned sector, namely Elizabeth Warren.”

Wall Street titans like Omega Advisors’ Leon Cooperman are also speaking about the possible negative market effects from a surging Warren. At CNBC’s annual “Delivering Alpha” conference in September, he told Scott Wapner that if Warren or Sanders become “credible” opponents to President Donald Trump, the “market will not be higher.”

“I think it would be a bear market and they go on for a year and go down 25%…I would say that basically her policies are counterproductive. They’re negative for capitalism,” he said specifically of Warren’s policies. 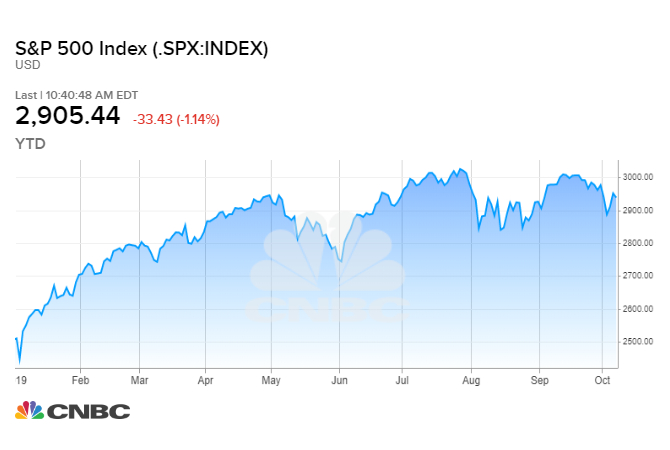 Stocks have been caught in somewhat of a holding pattern as of late. After rising to new highs in July, geopolitical tensions and fears of a global economic slowdown weighed on markets. In September the Dow Jones Industrial Average and S&P 500 came within 1% of their prior all-time highs, but they didn’t quite reach those record levels and have been moving lower since. The indices are now about 4% below their July highs. The Dow was down 270 points on Tuesday but most chalked that up to concerns about the U.S.-China trade war.

But some strategists believe that Warren’s gain in the polls is also contributing to this investor angst. According to the latest data, the Massachusetts senator is now polling at 26%, narrowly behind Biden’s 26.5% lead, according to RealClear Politics.

Oppenheimer’s Kotowski said that Warren’s surge in the polls, effectively making her “the presumptive Democratic front-runner” has led to a renewed focus on the type and amount of regulation that she would seek to enact. He specifically looks at her “Stop Wall Street Looting Act,” which is now back in focus after it had mainly been “gathering dust since July.”

The bill, which targets reforms to the private equity industry, was unveiled this past July and was co-authored by Senators Tammy Baldwin and Sherrod Brown, along with Representatives Mark Pocan and Pramila Jayapal.

“She is clearly portraying private equity managers as the axis of evil in the American economy…invectives from the Warren camp will no doubt be with us for at least the duration of the campaign,” Kotowski wrote. 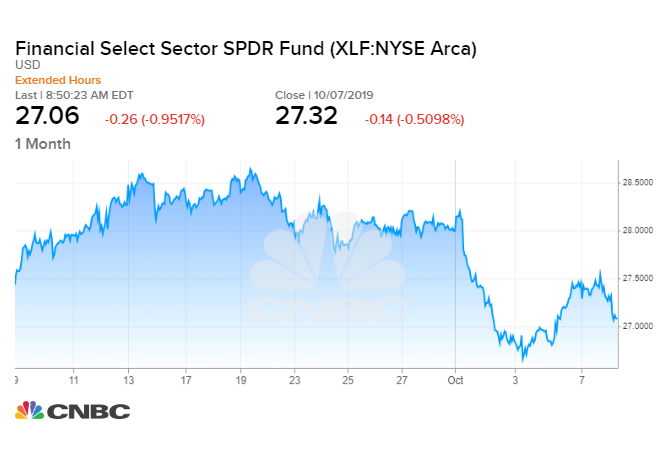 The XLF, which tracks the broader financial space, is currently trading 5% below its most recent July 26 high. The sector is coming off its first negative quarter in four, and is on pace for its fourth straight week of losses. “Concerns of a Warren presidency has weighed in on the sector recently,” Evercore’s Glenn Schorr wrote in a note to clients, while RBC bank analyst Gerard Cassidy noted that a Warren administration would be “very negative” for financial institutions since they would be “targeted for higher taxes and great regulation.”

The correction in banks stocks “seemed to reach a small frenzy,” Kotowski wrote, after Bernie Sanders took a leave of absence from the campaign trail following a heart attack. Following the announcement from his staffers, the financials ETF did slide 2% to end the day in the red. The thinking is that if Sanders were to step aside, that would give Warren an easier road to the nomination and presidency. But of course, correlation does not necessarily mean causation.

Senator Sanders is slated to attend the upcoming Democratic primary debate on October 15, but many, like Credit Suisse’s Moshe Orenbuch, believe that should Sanders ultimately drop out of the race “more of his supporters would back Warren,” making her likely to win the Democratic party’s nomination. This comes as the Ukraine controversy heats up, which is taking a toll on Former Vice President Joe Biden’s campaign. He’s still in the lead, but the gap is narrowing and his third quarter fundraising numbers came in fourth behind those of Bernie Sanders, Elizabeth Warren, and Pete Buttigieg.

Kotowski did note that Warren’s momentum is not the only possible reason for the recent softness in the financial sector. He cited “normal profit-taking” gaining speed, as well as investor concern following the WeWork IPO debacle as other possible factors.

Senator Warren has been a vocal – and frequent – critic of not only banks, but large corporations more broadly. Looking at the potential economic impact of a Warren presidency on the broader market, Sevens Report founder Tim Essaye wrote that “it is a very reasonable statement that if Warren were elected…it would be negative for the stock market in the extreme.”

“If expected earnings go down, stock prices go down. These policies would hurt corporate earnings universally,” he wrote, before adding that “they would likely improve quality of life for many demographics at the expense of corporate profits.”

Others, of course, have pointed to the areas of the market that could potentially benefit from a Warren White House. For instance, RBC apparel analyst Kate Fitzsimmons noted that “eliminated student loan debts and rising wages,” both of which are key elements of Warren’s campaign, “could free up customer wallet share for other discretionary categories.” She also argued that “a breakup of big tech including Amazon,” which is another of Warren’s key policies, could ultimately help smaller retailers.