Home
Stocks
Beyond Meat among the stocks set to benefit from ongoing pork shortage, Bernstein says
Prev Article Next Article

Meat prices are rising following a pork shortage caused by the outbreak of African Swine Fever, which could create a spike in demand for plant-based products like Beyond Meat, Bernstein said Tuesday.

African Swine Fever continues to spread in China, which is a significant piece of the worldwide the pork trade. Bernstein said the country accounts for roughly 50% of global pork production and consumption, and that roughly half of the herd has been wiped out from the disease.

Bernstein said beef wholesale prices will likely also rise. Against this backdrop of rising meat prices,  consumers might turn towards cheaper alternatives like Beyond Meat. The firm has an outperform rating on the stock, and its $106 target represents a 44% upside.

“Linked to this major dislocation due to African Swine Fever in the global meat industry, we expect that the plant-based meat and other plant-based categories will continue to do well, as prices for plant-based products start to look cheaper than elevated animal meat prices,” Bernstein analysts led by Alexia Howard said in a note to clients Tuesday.

This is just one of the potential upside catalysts that the firm sees for the stock.

Howard said that a shift towards conscience investing could also lead to investors piling into shares. She said this theme is playing out in Europe in particular, especially as the deadline set by the Task Force on Climate-Related Financial Disclosures approaches. This initiative creates a framework for how companies can disclose climate-related risks to investors.

Howard said that the ESG investing strategy — when a company’s environmental, social and governance factors are considered before buying a stock — is still in its nascent stage in the United States, but likened it to the trend that took shape in 2013 when consumers began focusing on healthier foods. 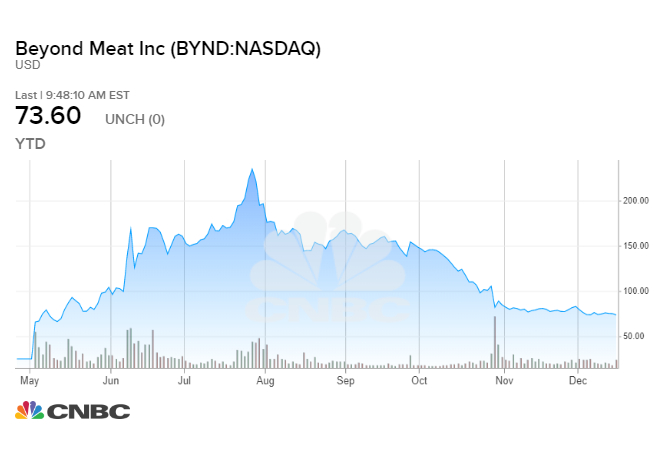 The rise — and subsequent fall — of Beyond Meat has been well documented. The stock soared 163% in its first day of trading on May 5, making it the best IPO performance in nearly two decades. Following the debut, shares climbed steadily higher, reaching an all-time high of $239.71 on July 26. A downward trajectory followed, and the stock now trades around $73. However, it’s still 192% above its $25 IPO price.

As the alternative meat market grows, other players will likely enter, but Howard said that Beyond Meat has an early-mover advantage, at least for the present.

“Demand growth seems strong both domestically and internationally and so there may be little incentive for leading players to compete on price even if newer upstarts try to do so to break into the market,” she said.

Elsewhere in the global food market, Bernstein said that processors like Tyson will benefit as African Swine Fever rages on. On the other hand, the firm has underperform ratings on Campbell’s Soup, Kellogg, General Mills, Smucker’s and Conagra based on rising input costs and shifting consumer tastes.