The iShares NASDAQ Biotechnology ETF gained more than 3% at its high on Tuesday — its best daily gain since January 7 — with Biogen powering the ETF higher. 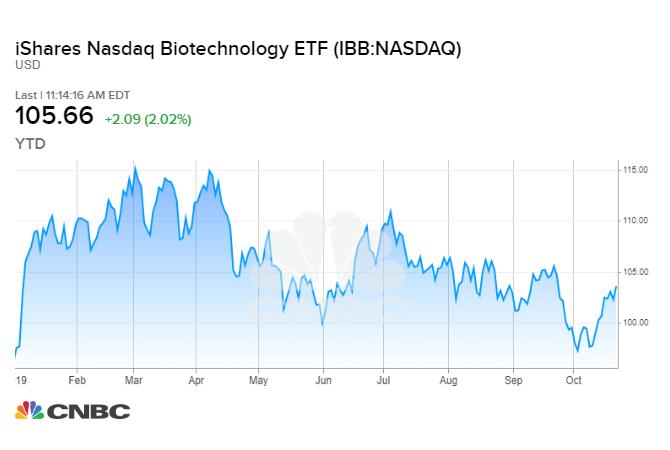 Shares of Biogen are up more than 25% and tracking for one of their best days on record ever after the company said it was once again seeking regulatory approval for its Alzheimer’s drug.

This is a reversal from the company’s statement last March when it said it would discontinue the trials after disappointing results. A lot was riding on the success of the drug, and more than $15 billion in market value was wiped after the company said it wouldn’t be moving forward.

But on Tuesday the company said that analysis of a larger data set showed that patients who received a higher dose of the drug showed improvements. The company said it worked with officials from the U.S. Food and Drug Administration during the analysis, and that it plans to officially file for approval with the FDA in early 2020. 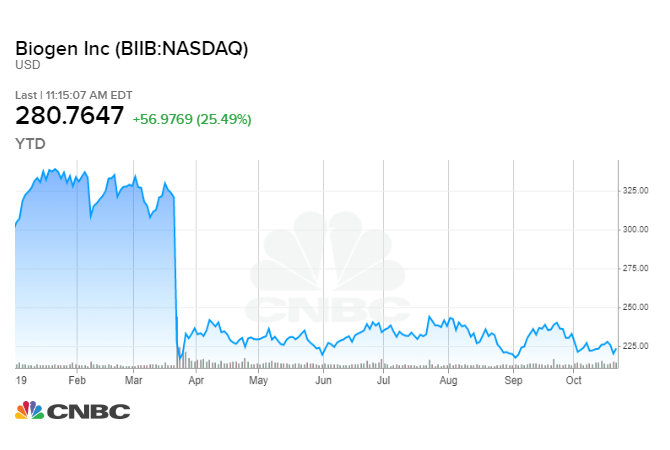 The shock announcement took the Street by surprise.

“Today’s announcement to submit for approval comes as unexpected,” Wedbush analyst Laura Chico wrote in a note to clients. Guggenheim’s Yatin Suneja said “this is an interesting development, and certainly unexpected.” And Alethia Young from Cantor Fitzgerald said she was “very shocked.”

Biogen’s surge lifted other names in the space including Vertex Pharmaceuticals, which gained 4%, as well as Gilead, Celgene, Regeneron, and Endo International, all of which were up more than 1%.

The implications for Biogen are big since the drug would be the first of its kind in the Alzheimer’s market, which is worth billions of dollars. But given the drug trial’s history, the Street isn’t completely convinced that the outcome will be different this time around.

“While the headline sounds positive (and very well could mean the company has an Alzheimer’s drug), the news today alone does not guarantee approval and questions remain,” Mizuho analyst Salim Syed wrote in a note to clients. He has a neutral rating on the stock, and $235 target.

Morgan Stanley’s Matthew Harrison reiterated this point, saying that there are “a range of questions that will need to be addressed for investors to gain confidence in this strategy.” Specifically, he pointed to questions about the FDA’s level of involvement, as well as what higher dosages mean from a commercially viable standpoint.

Guggenheim’s Suneja said that the “meaningfulness of these data are debatable and likely to be the key focus for investors and how they assign value” to aducanumab. But he also said that if the drug were successful it could “completely change the profile of the company.”

He noted that before the trial was discontinued in March the stock was trading in the $300 to $360 range. He expects the stock to move back to that level until a final decision from the FDA is rendered. Following the nearly 30% gain on Tuesday, shares of Biogen were trading around $285.

But nothing is certain yet, and Baird’s Brian Skorney said he expects the company to face an “uphill climb as they look to convince regulators” that results from the successful trial were “nothing more than random chance.”