Home
Stocks
Buy a Monet instead of a Treasury? Art has shown long-term returns that rival bonds
Prev Article Next Article

Astronomical auction prices may have defined the art market in recent years, but new research shows that over the long-term the value of art has steadily climbed, delivering returns relatively in-line with bonds.

Since 1985 contemporary art has been the best bet for investors of the asset class, returning an average of 7.5% per year, Citi said in a report using data from Masterworks.io. Impressionist art averaged 5.0%, while the art market as a whole returned 5.3% annually.

Art can be a wildly volatile market — among other things it’s subject to the whim of consumer tastes — but Citi said that it’s becoming an increasingly popular way for investors to diversify their portfolio since art’s return isn’t correlated with any other major asset class. In other words, its performance is independent of strength or weakness in various areas of the market.

This is “art’s most attractive investment quality over the long run,” Citi said.

Visitors look at a painting entitled ‘Salvator Mundi’ by School of Leonardo da Vinci during a press visit of the exhibition “Leonardo da Vinci” at the Louvre museum on October 22, 2019 in Paris, France. The painting sold at auction by Christie’s for over $450 million on November 15, 2017.

In 2018 the art market hit $67.4 billion, according to estimates from UBS, which was the second highest on record. In May one of Monet’s haystacks went for $110.7 million, and Picasso’s “Young Girl with a Flower Basket” and a Modigliani painting of a reclining nude woman were among the works to top $100 million at auction in 2018.

While these numbers are attention grabbing, there’s also a robust market at much lower prices. Citi found that works under $50,000 actually offer “the best performing price point from both a return and a risk per unit of return basis,” adding that “there is no disadvantage from a return perspective to having a small purse.”

Using data from Masterworks.io, which tracks auction sales from Sotheby’s, Christie’s and Phillips, Citi found that between 1985 and 2018 the art market as a whole has returned an average of 5.3% annually. Contemporary art has been the top performer, returning an average of 7.4% annually, while art from the Impressionist period has returned 5%.

Citi said that the relative outperformance of post-war and contemporary art is likely because it currently “commands the largest share of annual transaction volume,” and “appears to attract the most demand from new entrants to the market.” 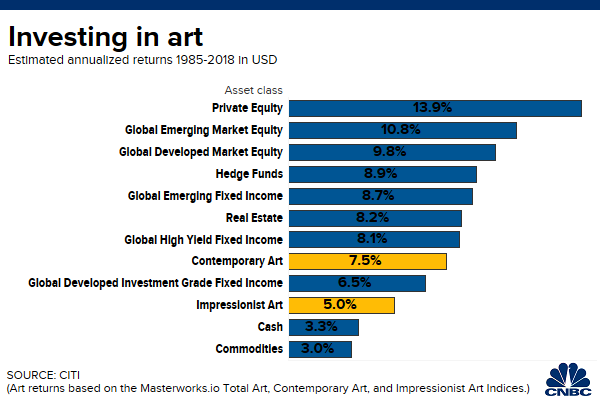 The firm also found that art typically does better when interest rates are low since the opportunity cost — or the higher that investors might otherwise be getting from fixed income — goes down.

“While the relationship has been far from perfect, art prices have tended to move in line with broad shifts in real interest rates,” the firm said. “Periods of falling and/or low real rates have coincided with rising art prices.”

After crunching the numbers from 13,000 works of art sold since July of 2016, the firm found a few key takeaways, including that holding art for longer typically lowers the risk of future returns, and that higher returns are typically given to more liquid artists. “Art has proven to be an excellent store of wealth over all time periods, easily exceeding inflation,” the firm said.

Overall, the firm said that art has been “an excellent store of wealth over all time periods” since it easily exceeds inflation.

A lack of transparency around sales has been a longstanding hurdle for the art market, but Citi said that could be about to change thanks to technological advancements like blockchain.

This is especially important as baby boomers prepare to pass an estimated $68 trillion to their children in the United States alone. Millennials and Generation X care more about how their money is being used, Citi said, so blockchain technology could be an important way for users trace and set up protocols for their donations, for example.

“With the potential for technology to enhance the world of art over the coming years, we believe that art’s existing appeal to collectors and investors could increase further,” Citi said.

Returns, but not without risk

While overall art’s return looks similar to that of fixed income, Citi was quick to note that there are many risks associated with investing in art.

For one, the over-arching annual rate of return disguises significant year-to-year variations. The volatility surrounding annual returns, as measured by the standard deviation from the average, was 14.9% across all art categories and 25.8% for contemporary art. To put that in context, investment grade fixed income from developed markets had a volatility rate of 5.2%.

Additionally, just like the performance of one basket of S&P 500 stocks can differ greatly from another basket, the performance of different artists and art collections can vary widely. Like real estate art is also an illiquid asset, which means that it typically cannot be offloaded immediately. It must be appraised, a buyer must be found, etc. A stock, on other other hand, can be sold immediately.

Finally, there’s no complete way to track art’s performance. Citi compiled the available data, but many sales still take place behind closed doors. And unlike other assets, “there are no established investment tracking products for art indices.”

Given the lack of a benchmark and that art is essentially invaluable since the beauty is in the eye of the beholder, the firm does not offer specific calls on the market as a whole.

“The Citi Private Bank Global Investment Committee does not offer tactical recommendations as to when to buy and sell art,” the firm said.