D.E. Shaw, the $50 billion hedge fund that in recent years has engaged in shareholder activism along with its many other disciplines, will make public Tuesday something the market has already known for weeks: It has a more than 1% position in Emerson Electric and is embarking on a campaign to bring significant change to the industrial giant that includes asking the company to split its industrial automation business from its climate technology business, while embarking on a significant effort to cut costs.

While Emerson’s stock price has already responded to stories of D.E. Shaw’s potential activism, it’s release Tuesday of a voluminous report outlining all the ways in which Emerson has failed shareholders over the last decade is its first public utterance since the reports of its potential activism first surfaced. 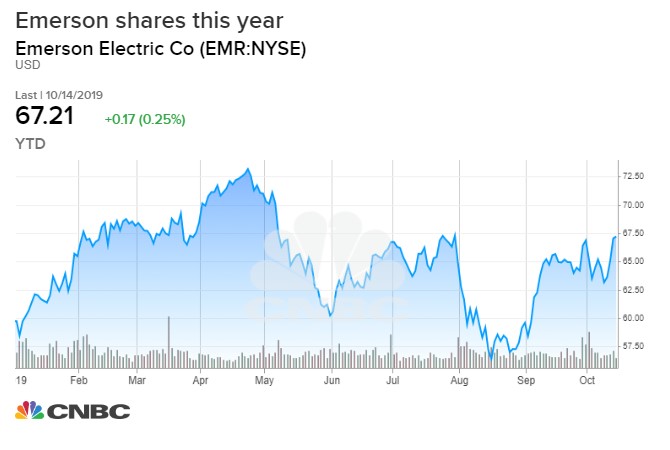 The report offers a searing indictment of Emerson’s long time chief executive officer David Farr and of its board of directors, who have presided over a significant shortfall in total shareholder return over the last three, five and ten years when measured against Emerson’s peers in the Automation or HVAC industries not to mention a 10-year year lag of 120% vs the S&P 500. 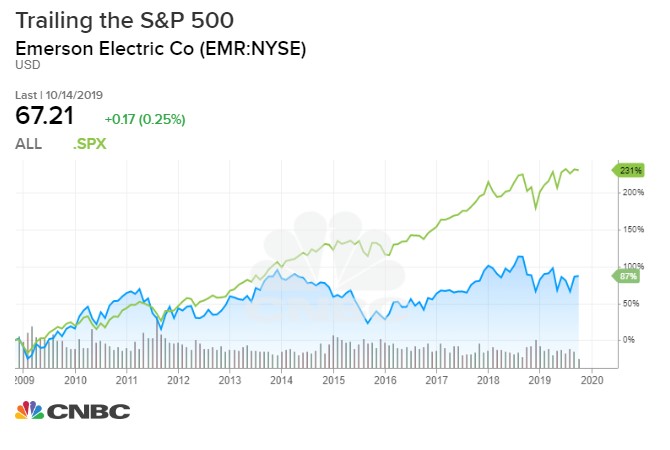 D.E. Shaw focuses on what it says is a history of poor capital allocation by the company since Farr took over as CEO. Since 2000, Emerson has spent nearly $14 billion of capital when accounting for M&A and CapEx but has only increased its EBITDA by $400 million over that period when accounting for its capital expenditures. The resulting 3% pre-tax return on incremental capital severely lags almost every one of its peers who post an average return of 11.4% during the same time period. One culprit for those poor returns on capital, D.E. Shaw maintains, is a cost structure that includes the highest level of SG&A expenses relative to sales among its peers and the lowest revenue per employee versus those same peers and a broader universe of industrial companies.

The report cites Emerson’s 18 different facilities in the city of Houston as one example of areas that could be used to reduce costs. Another is the company’s aviation department, which includes eight airplanes, one helicopter and a staff of 40 people complete with its own internship program.

Emerson’s CEO Farr has long been lauded as a consummate industrialist and his retail shareholder base has stood by him given a dividend that has increased every year of his term. D.E. Shaw claims he has been overcompensated for that track record with pay of $150 million over the last 10 years, 50% more than the S&P 500 average despite shareholder returns that have lagged the index significantly.

They also note that Farr has been compensated over $300,000 annually in perks related to his personal use of the company’s jets which is 5 times more than the average for Emerson’s peers.

They want Emerson to change its metrics for long-term incentive compensation, which are solely focused on EPS and free cash flow growth to include indicators such as return on invested capital and total shareholder return. Metrics that are used widely by its peers. As well they ask that Emerson unstagger its board so that all directors come up for a vote every year and note the board, apart from Farr, owns only .04% of the company’s stock with only three open market purchases by board members over the last 10 years. Four board members are currently up for election including Farr. The window for filing a proxy closes November 6th.

None of these arguments mean D.E. Shaw will get what it wants. It is a relative newcomer to activism, owns an only 1% stake and while it may say it’s ready to endure a proxy fight for board seats, it remains unclear it will do so. As well, the track record for creating value from company splits is far from clear. Consider Dupont, where after years of activism Trian Fund Management and Third Point Capital succeeded in getting a split which has yet to create value.On October 1, soon after reports of D.E. Shaw’s interest were reported, Emerson said it began a review of the company’s operational, capital allocation and portfolio issues.