The discount retailer said the tariffs slapped on Chinese imports will add $19 million, or 6 cents per share, to its costs of goods for the fourth quarter of 2019.

The company now sees fourth quarter earnings per share in a range between $1.70 and $1.80. This is well below analysts expectations of $2.02 per share, according to Refinitiv.

As a part of a prolonged trade war, the U.S. and China have engaged in a tit-for-tat tariff war for over a year. These tariffs have pressures retailers with large amounts of imports goods from China. It is yet unclear if both sides will be reaching a compromise before Dec. 15, when new U.S. tariffs on Chinese goods are set to kick in.

“The decrease from prior implied fourth quarter guidance represents the expected effects of…the continued uncertainty regarding trade and the related tariffs,” the company said in a release.

The company forecasts fourth-quarter sales in the range of $6.33 billion to $6.44 billion. Analysts are expecting sales of $6.41 billion, according to Refinitiv.

Shares of Dollar Tree tanked more than 13% in premarket trading on Tuesday. 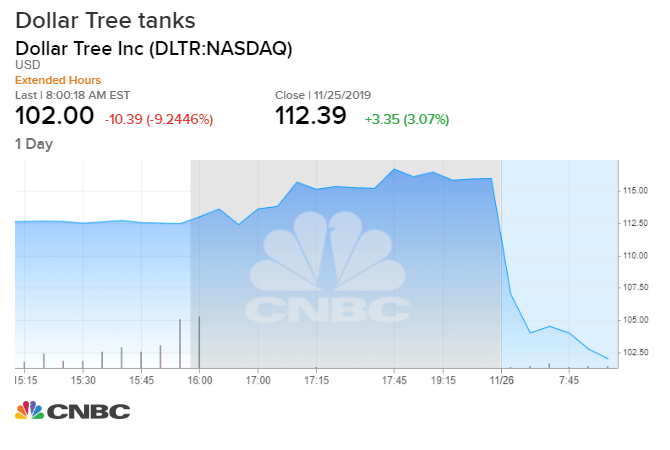 In addition to the disappointing guidance, Dollar Tree missed Wall Street’s expectations for its third quarter earnings. The discount retailer reported earnings per share of $1.08, lower than the $1.13 per share forecast by analysts, according to Refinitiv. Revenue was $56.746 billion, slightly higher than the $5.742 billion estimated.

Same-store sales for the third quarter were in line with estimates with growth of 2.5%.

Shares of Dollar Tree were up about 25% year to date through Monday’s close.