Wall Street loves SmileDirectClub but the stock’s performance is not something to smile about.

“We are bullish on the story and see a long runway of continued strong sales growth as the company is poised to benefit from a leadership position in a vastly underpenetrated TAM (total addressable market),” said Bank of America’s Michael Ryskin in a note to clients. The firm has a $19 price target on SmileDirectClub. 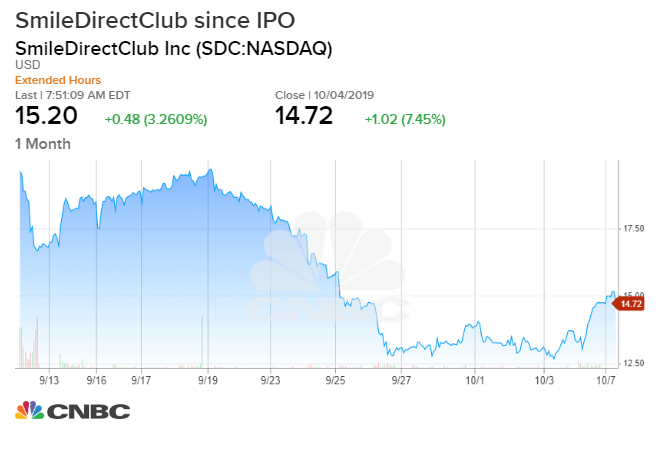 Shares of SmileDirectClub are down 36% since its initial public offering last month, after tanking 28% on its first day of trading. The online dentistry company’s first day ranks as the fifth worst debut of the 109 companies to go public this year. UBS said the stock’s recent underperformance spurs from concerns about third-quarter operational issues impacting revenue growth and new regulatory risks in California weighing on sentiment.

“When the company reports 3Q earnings on November 12th, we believe we will get visibility on growth when management can explain the magnitude and duration of the issues,” said UBS analyst Kevin Caliendo.

There is a blackout window following IPOs where major analysts from underwriting firms restrain from writing about the new stocks as to not appear hyping up the shares. It goes back to the rules put in place to create a separation of the investment banking and research units. Now that the blackout is over, analysts are free to write what they want about SmileDirect, though skeptics will say the analysts are still just trying to support shares brought public by their firms.

The start-up, founded in 2014, sells teeth aligners directly to consumers on its website and in its “SmileShops” starting at $1,895 for a two-year plan. SmileDirectClub shares will open at $14.72 on Monday but Wall Street set price targets for the company from $18 to $31 per share.

“SmileDirectClub’s clear aligners and the DTC business model the company employs solve many of the issues in the orthodontics market that have remained unaddressed for several decades –high costs and a significant time commitment,” said J.P. Morgan’s Robbie Marcus in a note to clients. The firm has a $31 price target on the stock, the highest on the Street.

Credit Suisse estimates the company can reach profitability by 2020, the firm’s research analysts Erin Wilson Wright said in a note to clients.

“We think the US alone could be a $70B market opportunity for SDC,” Caliendo said.

Guggenheim named the stock a Best Idea as the company is in its “early innings of growth, disrupting the traditional orthodontics market by providing a cheaper, more aesthetically pleasing alternative to brackets and wires,” said the firm’s analyst Glen Santangelo in a note to clients.

Shares of SmileDirectClub were little changed on Monday.

— with reporting from CNBC’s Michael Bloom.