Consumers are paying more attention to their carbon footprint and it could cost airlines billions of dollars, Citi said in a note to clients on Tuesday.

The firm said that “flight shaming,” which it defines as “the inherent guilt that an individual feels as a result of one’s aviation-related carbon footprint” is causing consumers to explore alternate modes of transportation when possible, and also to look for ways to offset their carbon emissions.

Citi estimates that over the next five years the cost of carbon offsetting economy flights will grow to $3.8 billion per year. It will either be absorbed by the consumer or the airline. But really the airline gets hit in both scenarios since if the price is absorbed by passengers the higher cost could lead to an overall slowdown in air travel.

“If this burden were to be fully absorbed by the consumer, our price elasticity analysis shows that there would be a shortfall in volume growth of -0.4% per annum vs. current forecasts. And while this does not sound detrimental, if this onus were to fall on the (largely fixed cost base) airlines, the cost of carbon offsetting all leisure consumption could be as much as c.27% of airlines’ profits by 2025,” analysts led by Mark Manduca wrote.

And that’s just for leisure travel. Corporate travel, which for ease of estimation the company defined as business class seats, will cost another $2.4 billion. That would reduce airline profits by an additional 17%. The firm said that these estimates could be conservative, and that the actual cost could be ten times higher.

These rising costs come within a backdrop of global air travel demand forecasts that the firm says is already “uncomfortably high.” 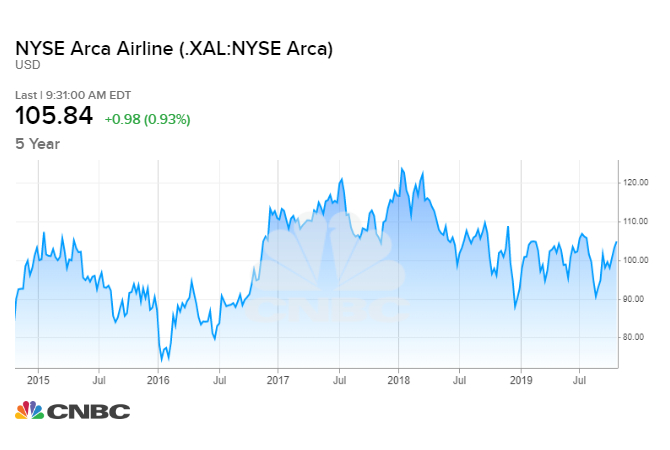 Carbon offsetting is when people seek to make up for their emissions by funding projects, such as planting trees, that reduce greenhouse gasses. With that in mind, the firm said the beneficiaries of the carbon offsetting business will likely be rail operators, governments and forestland owners.

To pass the cost along to consumers airlines may take creative approaches in an effort to shame customers.

“We hypothesize that some airlines will ‘reward’ customers who choose to offset their carbon footprint by granting them a green seat on an aircraft. Meanwhile, customers who do not offset will be allocated a red one and placed into a state of ‘shame,'” the firm said.

WATCH: How the 737 Max grounding is affecting airline earnings