Goldman Sachs is on track to pay its employees the lowest of any year in at least the past decade, and executives warned that the trend will continue as software consumes more of the firm’s businesses.

The bank set aside 35% of its revenue for staff compensation and benefits so far this year, the lowest since at least 2009, according to an analysis of Goldman’s data.

Put another way, the average Goldman employee earned $246,216 for the first nine months of 2019, less than half the $527,192 at the same point in 2009. That figure is calculated by dividing the bank’s compensation pool by the number of workers.

It’s the latest sign of the times for Wall Street and Goldman in particular. Trading became far less lucrative for banks after financial crisis-era rules discouraged hedge-fund like bets and central banks drained volatility from markets. At the same time, human traders have been disrupted by electronic firms like Virtu and XTX, places that employ a few dozen coders to trade billions in stocks and currencies every day.

“We are in the midst of the biggest marriage of tech and finance in history,” said Mike Mayo, a veteran bank analyst at Wells Fargo. “It means more bots relative to bankers, more machines, more automation, more scale. The next decade will see the implementation of technology to a greater extent and in ways that have never been done before.”

The drop in employee pay will continue as Goldman undergoes a fundamental shift: For most of its 150 years, its business model was essentially to pay top dollar for the best talent available.

Now, as CEO David Solomon faces pressure to reinvent the bank and unearth new sources of revenue, Goldman has been working feverishly to create automated solutions in existing and nascent businesses. That means clients will increasingly interact with software instead of expensive humans.

“As we grow more platform-driven businesses, we expect compensation to decline as a proportion of total operating expenses,” CFO Stephen Scherr told analysts on Tuesday. “Platform businesses should carry higher marginal margins at scale and be less reliant on compensation.” 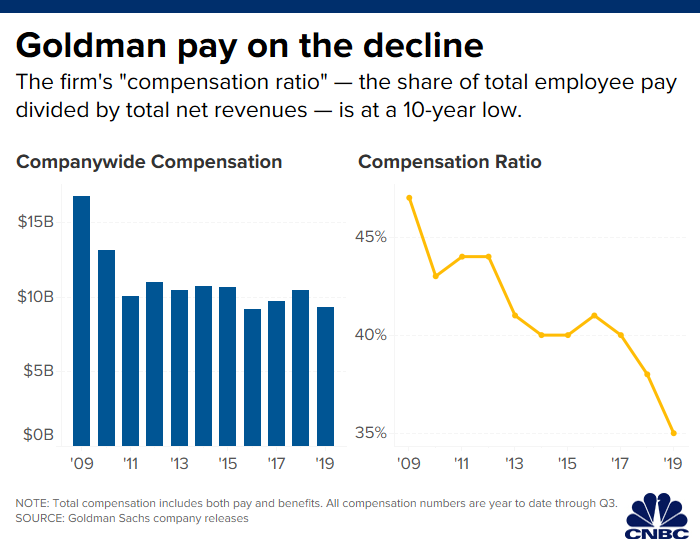 In fact, the firm spent $450 million so far this year on efforts to draw in new customers, including its launch of the Apple Card, the expansion of its Marcus retail banking brand and the creation of a payments platform for corporate clients.

With the bank facing pressure on its overall returns and skepticism over its transformation, the money has to come from somewhere. Taking down employee compensation is one such lever, according to Portales Partners analyst Charlie Peabody.

To be fair, talented traders and bankers at top-tier firms like Goldman can still command multimillion-dollar bonuses. Part of the downward shift of pay at Goldman represents the move to hire younger, cheaper workers, more engineers and support staff for new consumer ventures. Goldman had 37,800 workers as of Sept. 30, compared with 31,700 10 years ago.

And the bank’s compensation accrual is merely its best estimate of what it will need to pay its people for their work in 2019; that figure can be adjusted up or down, depending on the final three months of the year.

But the trend is clear. Marty Chavez, a former Goldman technology chief who pushed to automate trading desks, told Bloomberg last month that for future traders, understanding how to code will be as important as “writing an English sentence.”

With reporting by CNBC’s Nate Rattner.