The S&P 500 surged to a new all-time high on Monday, and Goldman Sachs says the bull market will keep on rolling into 2020 on the back of three big buyers: corporations, foreign investors and US households.

Companies will spend $470 billion on stocks next year, with foreign investors and US households contributing $50 billion and $30 billion respectively, the firm found. 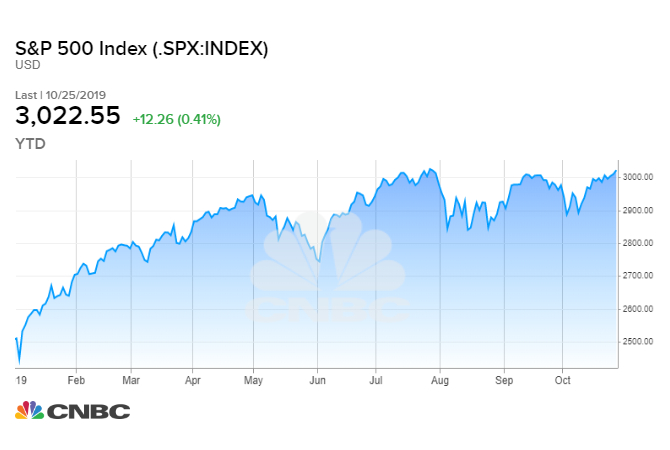 While global growth fears and heightened valuations slowed the S&P’s march to a new all-time high, Goldman says the backdrop heading into 2020 remains favorable for stocks.

Corporations will represent the “largest source of U.S. equity demand” next year as buyback spending continues and acquisitions pick up.

Goldman expects companies to spend $470 billion through share repurchase programs and M&A spending. Bottom-line growth is accelerating — 6% in 2020 vs. 3% in this year according the firm’s estimates — which “should support increased spending on M&A.”

Within the 11 S&P sectors, the firm anticipates buyback spending will be the highest among technology companies, followed by energy and utilities companies.

Goldman did note, however, that the $470 billion represents a 2% decline versus 2019 spending. The firm cited “political scrutiny of buybacks” and uncertainty ahead of the 2020 presidential election as potential reasons for the slowdown.

Goldman expects foreign investors to buy $50 billion worth of US stocks next year in part because of the declining dollar.

Economics at the firm are predicting the dollar will weaken by 3% over the next year, which historical data suggests is typically supportive of foreign investment.

Next year’s net buying will mark a departure from 2019, when Goldman predicts that foreign investors will pull a total of $175 billion from the US stock market.

That said, the ongoing US-China trade war remains a key factor to watch since it could deter Chinese buyers.

“A risk to aggregate foreign investor equity demand is the progress of the US-China trade conflict, which could affect US equity purchases by investors in China,” the firm said.

When it comes to investors here in the United States, Goldman is expecting domestic households to contribute $30 billion to the market in 2020.

One of the driving factors could be US investors’ historically low cash position.

After crunching the data, Goldman found that current cash holdings rank in the 15% percentile, which is below the 22% average over the last 3 decades. This could suggest that investors are optimistic that they can find solid returns in the market, although there has also been an uptick in bond fund buying.

Goldman pointed to withdrawals by mutual funds and pension funds that will weigh on stocks. Outflows are predicted to total $100 billion and $250 billion, respectively, from those two groups next year. That would mark the fifth straight year of net outflows for mutual funds as investors pivot to passively-managed funds.

The firm predicts that investors will continue to favor ETFs, but the $150 billion predicted contribution for next year is behind he five-year average of $220 billion

So far this year investors have pulled $217 billion from mutual funds, while pouring $117 billion into passively managed funds for a new outflow of $100 billion. If this pace of selling and buying continues into year-end, it would be the second largest outflow for US equity funds in 15 years, the firm found.