Members of the media take photographs of iPhone 11, iPhone11 Pro and iPhone 11 Pro Max smartphones in the Apple Marunouchi store on September 20, 2019 in Tokyo, Japan.

Wall Street isn’t expecting blowout earnings for Apple, which could be the best thing for the stock, according to Citi.

The firm said the Street’s estimates for Apple’s fourth-quarter earnings are in the middle of the guidance range but the lowered expectations bode well for the stock. Citi sees a 15% gain in the stock over the next year as its service business outperforms, surprising investors that have cooled on the shares.

“We believe lowered expectations augur well for share price appreciation in the coming months,” said Citi’s Jim Suva said in a note to clients on Thursday.

Citi is expecting fourth-quarter revenue of $62.5 billion (consensus $62.8 billion) and earnings per share of $2.82, in line with consensus estimates. Apple said it is expecting revenue between $61 billion to $64 billion. However Suva said the tempered expectations are the best thing for the stock, which is up nearly 40% this year. 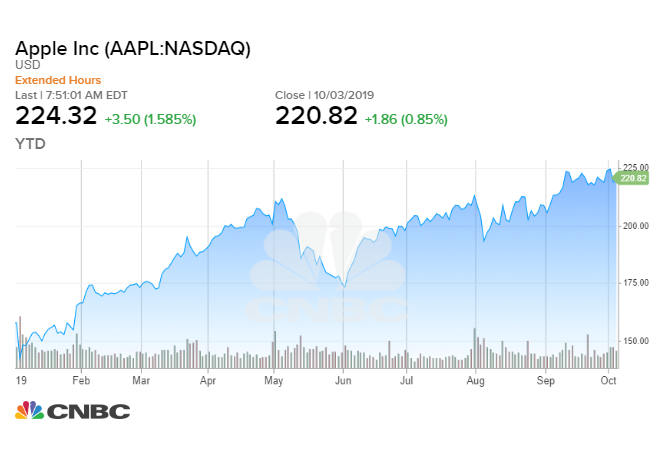 “We expect tariffs and broader global macro to weigh on iPhone unit sell through in December, albeit the more attractive price points on iPhone 11 (vs its predecessor) should help to provide some offsets,” said Suva.

Suva is bullish on Apple’s services business on the heels of its Apple TV+ launch.

—with reporting from CNBC’s Michael Bloom