The so-called bond king pointed to the ratio of copper to gold prices, which he believes has the predictive power of U.S. interest rates. That ratio is saying the benchmark 10-year Treasury yield should be 2%, Gundlach said in a DoubleLine investor webcast on Tuesday after the market close.

The 10-year Treasury yield has fallen to around 1.83% from 2.75% at the beginning of the year. Gundlach will appear on CNBC’s Halftime Report on Wednesday to elaborate on his calls. 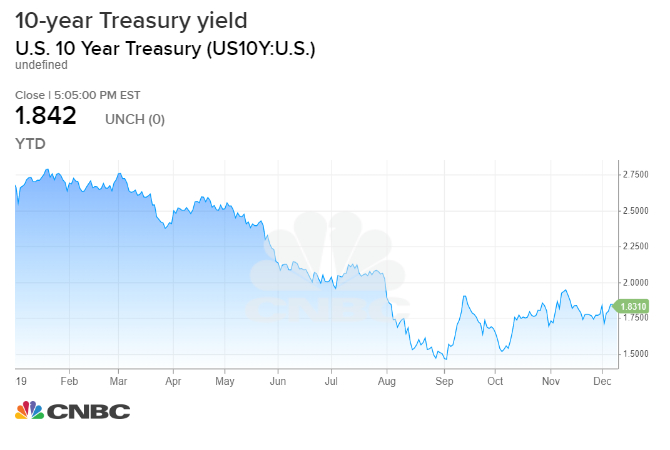 Gundlach, who put recession chances at 75% just a few months ago, now foresees a 35% probability of a downturn by end of 2020. He expects consumer confidence and other leading indicators to improve in the next few months.

The billionaire investor noted that most of what Federal Reserve Chairman Jerome Powell has done this year has been “bad.” The central bank has cut interest rates for three straight times in 2019.

Gundlach said the Fed’s moves this year have been driven by bond market expectations more than economic need. Powell has been wrong at every turn, Gundlach noted.

In December 2018, Powell described the Fed’s reduction of its balance sheet asset holdings as being on “autopilot,” which roiled the stock market. In July, Powell characterized the Fed’s first rate cut since 2008 as a “mid-cycle adjustment to policy,” rather than the beginning of a period of successive cuts that the market was looking for.

At the Fed’s October policy meeting, Powell said the Fed would need to see a “really significant” rise in inflation before hiking rates, which Gundlach believes is another signal that long-term rates are on the rise.

“This is steeper yield curve rhetoric,” said Gundlach. “I’m surprised the long end of the curve hasn’t been a little weaker.”

The core PCE index is the Fed’s preferred inflation measure and has consistently undershot the U.S. central bank’s 2% target this year.

The Fed is also in the midst of a buying T-bills in a process that it has insisted is not QE but instead is an effort to keep its benchmark overnight funds rate within the 1.5%-1.75% target range.

“It’s a near perfect record — when the Fed grows its balance sheet the curve steepens,” Gundlach said.

On the 2020 presidential election, Gundlach said his base case is that President Donald Trump will get re-elected.

DoubleLine actively manages clients’ money and has more than $140 billion in assets under management, according to the firm’s website.