Most Americans are open to ditching traditional banks for big tech, according to a new report.

Sixty two percent of U.S. respondents in Bain’s annual retail banking report published Monday said they would buy a financial product from an established technology company. Among people ages 18 to 34 it was even higher — roughly 75% said they would be open to banking with a tech giant.

“It has become increasingly clear that consumers would much rather just do their banking digitally than talk to a human being. That’s part of what’s driving the tech adoption,” Bain consultant and partner Gerard du Toit told CNBC in a phone interview. “We’ve seen around the globe increased willingness to bank with a technology company, especially with younger generations.” 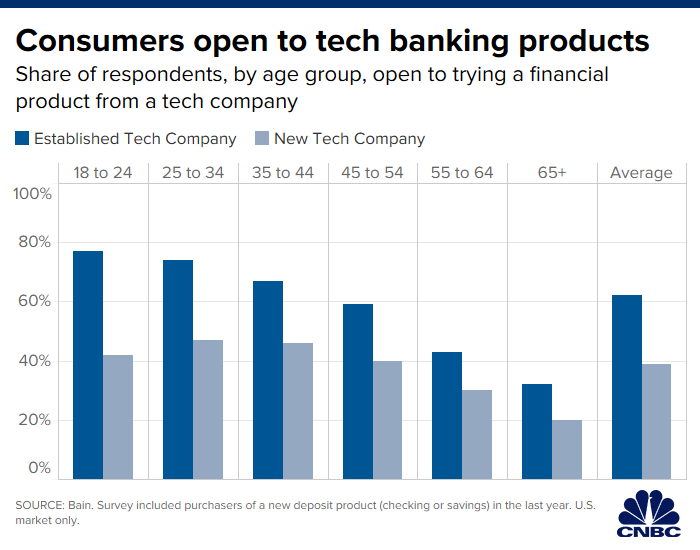 Tech players were not equally appealing to every age group. Among U.S. respondents age 65 or older, only 32% said they would bank with established technology companies. The firm surveyed 131,000 people across 22 countries and found that young people across all regions were significantly more open to alternative banking options.

The study highlights Silicon Valley’s potential reach as it wades into consumer finance. Google is partnering with Citigroup to launch a checking account as early as next year, a source familiar with the plans told CNBC last week. Apple launched its an iPhone-integrated credit card with Goldman Sachs this summer. Last week, Facebook launched a new payments service that will operate across its family of apps. In Asia, tech companies Tencent and Alibaba are leading in payments thanks to their mobile apps.

Respondents also gave the tech disruptors higher “net promoter scores” — a metric used to measure customer experience — than they gave to traditional banks. The leaders in customer experience in both bank and tech companies are “those who have a digital-first mode,” said du Toit, who leads the banking and payments sector of Bain’s Financial Services practice in North America.

Part of retail banks’ strategy will involve partnering to get more distribution as tech companies continue moving into Wall Street’s territory, according to Du Toit.

“They wouldn’t want to be left on the sidelines 10 to 15 years from now with no dance partner, and all the big tech names tied up,” he said.