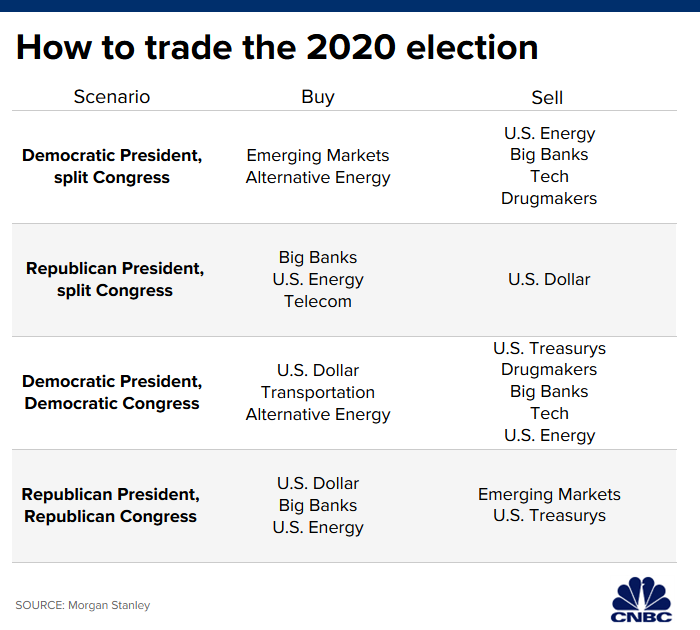 With the 2020 election now only a year away, Morgan Stanley put together a cheat sheet for investors to trade the eventual outcome. For example, the firm sees bank and oil stocks as the biggest winners if President Donald Trump wins re-election and the Republicans keep the Senate.

Morgan Stanley laid out the four possible scenarios like so:

Under scenario one, the firm notes that alternative energy stocks would gain, but that oil and gas stocks, along with big banks could come under pressure. Massachusetts Senator Elizabeth Warren, for example, has touted an ambitious climate change plan, calling for $3 trillion in spending under a 10-year plan to move the U.S. to 100% clean energy and safeguard poorer communities dependent on the production of fossil fuels.

In the second scenario, President Trump wins re-election, but Congress remains divided between a Republican Senate and a Democratic House. This status-quo outcome should fuel the gradual rollback of banking and oil and gas regulations. Trump in 2018 signed a bill that eased regulations on all but the largest banks, raising the threshold to $250 billion for banks considered too important to fail and absolving the smaller banks of certain stress tests.

The third outcome, denoted by Morgan Stanley as a “Blue Wave,” would see the Democrats take the White House as well as both chambers of Congress. The unified government would likely tackle key policy initiatives and expand spending on health care, transportation and infrastructure. But a Democratic coalition would also spell heightened scrutiny and pressure on big financial firms, big tech and big pharma. U.S. debt prices would fall if the federal government approved big-ticket spending items.

Meanwhile, a “Red Redux,” whereby the GOP takes back the House and keeps Trump in the White House, could propel the current pace of deregulation. U.S. oil and gas, financial firms and telecommunication companies would all see a boon while emerging markets could come under pressure if the U.S. dollar strengthens further.

Despite the few outcomes, Morgan Stanley warned that any initial reaction from the overall market may be the wrong one and that Wall Street’s market fears of Trump’s 2016 election were overstated.

“While it would be reasonable to deduce from our survey that moves toward a Democratic victory could initially weigh on risk markets, we wouldn’t have confidence in the durability of such a reaction. The 2016 election serves as a cautionary tale here,” wrote Michael Zezas, the head of policy strategy at Morgan Stanley and lead analyst on the 130-page report.