Home
Stocks
Nearly 40% of Facebook's valuation is on the line from regulatory risk, HSBC says
Prev Article Next Article

The Facebook logo is displayed during the F8 Facebook Developers conference on April 30, 2019 in San Jose, California.

Imagine $225 billion of Facebook’s $565 billion market cap was gone. That’s how much HSBC Global Strategies said is threatened by the social media giant’s dance with regulators.

The firm initiated coverage of Facebook with a reduce rating, recommending investors sell the stock. HSBC said regulatory overhang is equivalent to 38.5% of Facebook’s current valuation.

“Although it has taken time for policy makers and regulators to ready their ideas, it should now be clear they have well-advanced plans for intrusive interventions,” said HSBC senior analyst Nicolas Cote-Colisson in a note to clients. 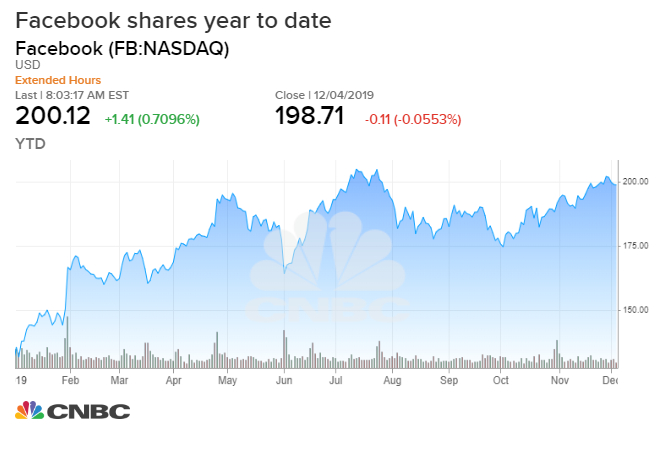 Facebook has drawn negative attention from politicians and regulators from the U.S. and all over the world. The Federal Trade Commission, the   the European Union have all announced investigations into Facebook, either on the tech giant’s practices on digital competition or concerns about its digital currency Libra. Despite the regulatory overhang, shares of Facebook are up over 50% this year. But HSBC said its only a matter of time before the stock prices in the real threat of privacy, regulatory and antitrust risk.

“In a sense, Facebook’s sheer pace of growth is becoming a risk factor in its own right, as it is likely to accelerate scrutiny and intervention,” said Cote-Colisson.

The results of the regulatory crackdown, including fines and policy changes could cost Facebook almost 40% of its market value, the firm said. Trust-busting, anti-competitive fines, privacy fines, taxation, merger control and telecoms-type regulation all pose potential implications to valuation.

“For instance, the possibility of imposition of telecoms-type regulation to make it easy for users to move to competitors,” said Cote-Colisson.