Home
Stocks
Pot stocks try to rebound from terrible 2019: 'This is 2008 for the cannabis industry'
Prev Article Next Article

The legal marijuana industry is going through an epic shakeout.

“This is 2008 for the cannabis industry,” said Kevin Murphy, chairman and CEO of Acreage Holdings. He also compares it to the dotcom bust.

The question remains, which cannabis company will come out of the bust as marijuana’s Google, and which will disappear like Pets.com?

“It has been an exciting year, and not in the way that shareholders in this sector would like,” said Cam Battley, chief corporate officer for Aurora Cannabis.

Battley and others are in Las Vegas this week at MJBizCon, the largest marijuana business conference in the world. More than 1,300 exhibitors and 35,000 attendees are trying to figure out if 2020 will be better than 2019.

“I think the launch in the state of Illinois is going to be a big market mover for the entire industry and that’s coming January,” said Danny Moses of Moses Ventures. 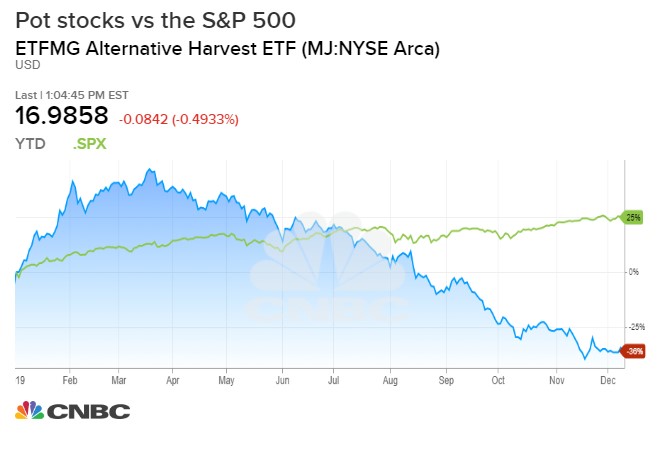 A catalyst is needed. The top six publicly traded marijuana companies have lost a combined $25 billion in market value since the end of March. There are a variety of reasons which boil down to one — everything is taking longer to roll out.

The industry has been especially caught off guard in Canada, where the federal government has legalized cannabis across the country.

“The anticipated roll out of bricks and mortar retail stores did not happen at the pace that everybody had anticipated,” said Battley.

As a result, Aurora has had to put the brakes on production expansion, “until the demand is there.” He believes the backup in supply will start to ease in 2020 as more stores open.

Battley said new developments in Canada next year should help, including edibles, vapes and infused beverages.

He said Aurora still has the best gross margins in the industry, though Nelson Peltz has yet to find it a deep-pocketed partner, the way Canopy Growth struck a deal with Constellation Brands. “Nelson continues to remain deeply involved in our business, and we communicate with him and his team on a virtually daily basis.”

Al Foreman of Tuatara Capital has over $300 million in two private equity funds hunting for good investments. To him, the industry’s terrible stock performance reflects maturity in expectations.

“This started back in 2018 with the parade of U.S. IPOs, all of which were pointing to forward looking estimates based on valuations in 2020 and 2021,” he said. “Our belief was you needed to start hitting your numbers in 2019, so 2019 is the year where financial results mattered.”

Danny Moses thinks Canadian stock prices are still a little expensive. He prefers U.S.. companies like Cresco and Green Thumb Industries. However, Moses expects more M&A in 2020 between companies which need to merge to live. He also expects more of them to issue shares of stock as a major source of cash.

“I would have thought by now that the debt markets would have opened up a little bit more than they have,” he said.

And there are other issues he’s watching. California’s illegal market continues to outperform and undercut the legal market, even as the Golden State leads in innovation.

“It’s still the best testing ground for product media, advertising, technology, delivery, everything will emanate from California. That’s good. But it also has everything that’s bad.”

Moses also said a lot of money which could have gone into marijuana is now chasing hemp and hemp-based CBD.

“I think one of the things in the CBD market that still remains to be seen is, is it really CBD in the product? I think as you test some products that are out there, I would imagine you’re going to find that there’s not.”

He encourages potential investors who’ve gone into the sector “blindly” to do their due diligence. This is still a bottom up industry.

“Go visit a dispensary, go see a grow, start to really understand the market,” Moses said. Even so, he’s optimistic about 2020.

“I’m very into buying the fear and selling greed…and right now there’s a lot of fear out there.”