Shares of biotech Aurinia Pharmaceuticals surged on Thursday after the company announced positive results from a trial for its lupus-related drug. 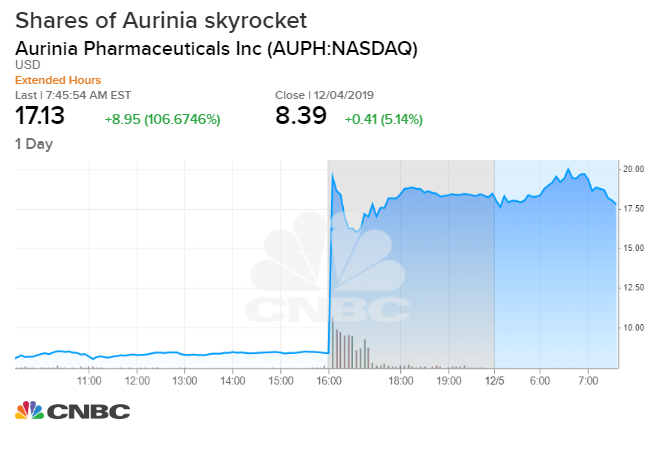 The Victoria, Canada-based company rallied as much as 106% on Thursday after its phase three trial for drug voclosporin posted positive efficacy and safety results in the treatment of lupus nephritis, the company said in a statement on Thursday evening. The jump in Aurinia’s stock pushed its market cap to more than $1 billion.

Some analysts expect the stock to quadruple on the better-than-expected trial results.

“The data were better than we expected,” Alethia Young, biotech analyst at Cantor Fitzgerald, said in a note on Thursday. “We think that shares will be up at least 300-400% based on this news. If we conservatively assume VCS is a $1B drug, we think that investors could put a 3-4x revenue multiple on the company (so $3-4B).”

Cantor has an overweight rating on Aurinia and a 12-month price target of $24, which would translate into a 186% gain from Wednesday’s close.