The small cap Russell 2000 index jumped to a fresh 52-week high Monday, signaling small stocks may be set up for a breakout that could help lift the entire market.

“The dynamics of this market are changing. The definition of this new uptrend that’s developing is that pullbacks should be shallower and shorter lived and and the upswings should be stronger,” said Ari Wald, technical strategist at Oppenheimer. “I think this is a market where global equities are breaking out across the board. It’s not just the U.S. large cap growth anymore. It’s U.S. broadly, and now small caps, a big breakout in the Russell 2000 today. You really have a market that is firing on all cylinders.” 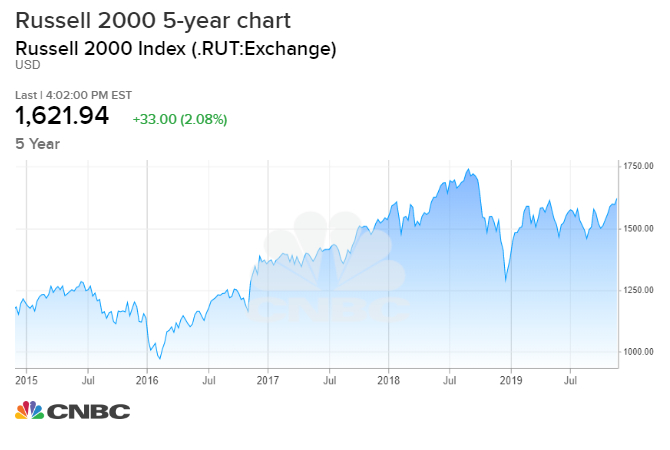 The small cap Russell 2000, trailing other indices in the march to new highs, broke its previous high from May 6 of 1,618.4 early Monday, and then climbed higher into the close. The Russell has risen near that level previously but failed to break above it.

Frank Cappelleri, head market technician at Instinet, said the move in small caps was a positive, but the gains will need to hold.

“One of the biggest divergences was that small caps have lagged, and this still has a while to go to recapture its all time highs from last fall,” said Cappelleri. “This is really a step in the right direction, especially since it got through a level that was rejected a number of times.”

Cappelleri said just a third of the S&P 500 are at or within 3% of all-time highs, and a broader range of stocks need to join the rally so small caps are a welcome addition.

“The more components you have moving together, the argument is the stronger the chances are for the breakout to hold and not fail,” Cappelleri said.

Strategas technical analyst Todd Sohn said the question now is whether the Russell can sustain the move and break out, and it appears it can because of both large cap leadership and the seasonal boost, or the fact the market is usually heading higher at this time of year.

The iShares Russell 2000 ETF (IWM) also hit a 52-week high Monday and was about 7% below its all-time high. The ETF was trading on extremely high volume of about 24 million shares, about 10 million ahead of its daily average volume.

“I think it’s bullish because this has been a lagging group and they’re finally breaking out,” said Sohn. “If you were to look at what’s helping this move, it’s a sharp acceleration from biotech stocks. That’s the second largest weight in the Russell 2000.”

Wald said investors are more bullish, but they are still nowhere near being overly bullish and that should keep the market going. His target for the S&P in the rally is 3,500.

“The stocks that were still below 200-day moving average…half of them were micro cap. And now you have this big turn in the Russell 2000. That’s very positive for market breadth,” Wald said. Wald said stocks emerged from a bear market last December when the market troughed on Dec. 26. Since then the S&P 500 has regained 33%, which coincidentally is the typical recovery in the first year after a bear market.

The second year averages a gain of about 11%, he said.

Analysts said the fact that volatility is so low is also a positive for stocks. “It doesn’t have a pulse,” said Sohn of the VIX, or the CBOE Volatility Index. It reflects the S&P 500 puts and calls on the CBOE.

He said in periods of low volatility, the market has done well, as in the 1990s. But also just looking back to 2017, when the S&P advanced and the VIX was very low.

“Overbought in an uptrend which is where are now is historically bullish. There could be some modest dips along the way but ultimately the trend is for an advance,” said Sohn.