There’s a surprising ETF winner so far this year.

The Invesco Solar ETF has returned more than 50% year-to-date, far outpacing the broader market’s 15% rise, as well as the S&P Energy Sector, which is down 2% for the year.

A number of factors have led to the surge in solar stocks and the fund, including a rise oil prices, lower interest rates and stronger earnings growth from the group. An expiring federal tax credit has also moved demand into this year.

All of this is within the backdrop of increasing worldwide demand for energy, and a greater emphasis placed on environmentally friendly sources of power. 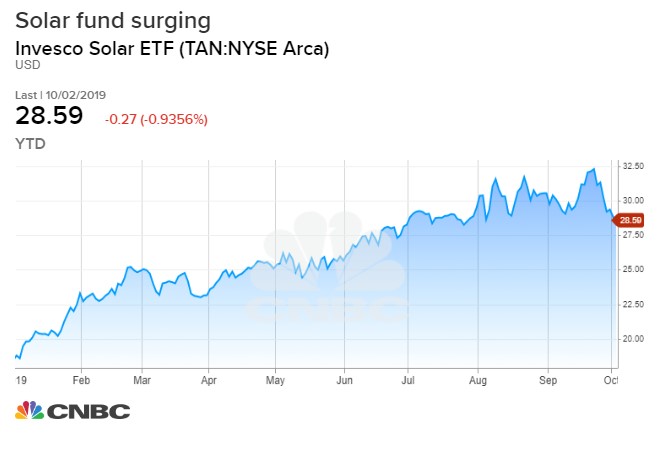 The ETF is international in scope, and includes companies in all areas of the solar economy from part makers to panel manufacturers to battery storage suppliers. Top holdings include SolarEdge, First Solar, Xinyi Solar Holdings, and Enphase Energy. 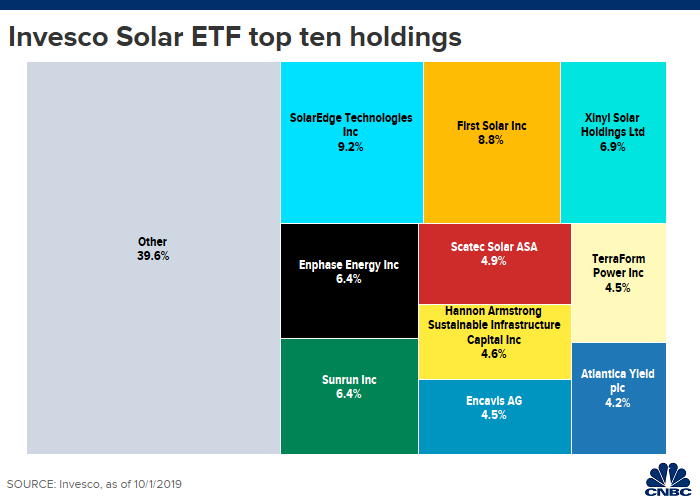 The top-performing stocks year-to-date in the ETF are Enphase Energy, SolarEdge Technologies, and SunPower Corporation, which are up 363%, 131%, and 104%, respectively. Enphase and SolarEdge operate in the broader solar ecosystem, while SunPower is a solar panel manufacturer.

“When you look at upside momentum in the past year it’s been driven by earnings surprises, not by investor sentiment around the future of the sector,” he said. “In other words, market prices are following fundamentals rather than getting way ahead of them, which has really been the story of the last 10 years.”

In addition to earnings growth, another key factor that could be behind this year’s solar surge is the upcoming expiration of a federal tax credit. Through the end of 2019, 30% of the cost of installing a solar energy system can be deducted from federal taxes. In 2020 that rate will drop to 26%, followed by 22% in 2021 and 10% in 2022.

While Bloom argues that the tax cut isn’t “that much of an issue” given that solar is now “cost competitive without subsidies,” it’s not the first time the industry has been caught in the political crossfire.

In 2018 the sector was rocked by President Trump’s 30% tariff on solar imports, as well as an announcement halfway through the year that the Chinese government planned to reduce subsidies for solar projects. The U.S. and China are currently the largest markets for solar energy, so policy changes in either country can have ripple effects across the space. 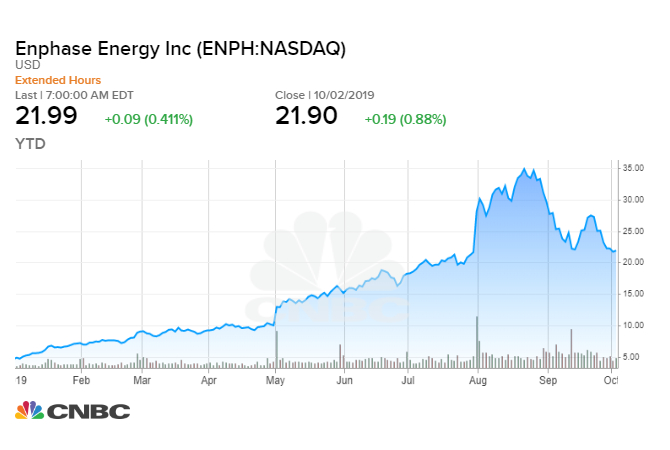 Solar investing is not for the faint of heart, as it’s traditionally been a highly volatile area of the market. 2019’s surge is a sharp reversal from 2018 when the ETF fell 26%. “I think that you have to acknowledge past performance,” Bloom said, adding that “there’s going to continue to be volatility because there’s volatility in policy. Whether it’s tariffs on solar or subsidies on solar.”

The industry is also highly sensitive to price changes in oil and natural gas. Higher oil prices supported a rise in solar stocks for much of the year, but the ETF is down 5% this week, following a drop in natural gas prices.

It’s also cyclical in nature, meaning that the broader economic backdrop plays a role in the demand cycle for things like new construction projects. Higher rates means it’s more expensive for companies to borrow money, which in turn means they may be less willing to invest in capital-heavy projects.

At its September meeting the Federal Reserve cut interest rates for the second time this year — reversing a period of steady hikes beginning in December 2015 — which means that businesses might now be more likely to pick up their capital spending.

Adoption of solar power — and the ecosystem involved from the panel maker to the installation company to the power provider — has been on the rise from individuals and corporations alike. Residential adoption of solar panels is growing 8% year-over-year, according to research firm Wood Mackenzie, and publicly traded companies are increasingly viewing renewable energy as beneficial both from an economic standpoint, and from a public image perspective. Last May, for instance, Facebook announced a partnership with Longroad Energy Partners for a 4,600 acre solar farm in West Texas.

Overall, Bloom believes that solar stocks are at an inflection point of sorts. While the Street initially underestimated “how hard it was going to be to be profitable,” fundamentals are stabilizing and companies are beginning “to grow profits while growing unit volume.”

“We’ve hit critical mass…hit economies of scale that will sustain the sector into the future,” he said.