A woman fuels her SUV at an Exxon Mobile gas station in Chicago.

If worldwide demand for SUVs continues to grow at its current pace, the carbon emissions from these larger vehicles will outweigh the benefits from electric vehicles, a new study from the International Energy Agency found.

The number of SUVs on the road around the world grew from 35 million in 2010 to over 200 million last year, representing 60% of the increase in the global car fleet over the 8-year period. 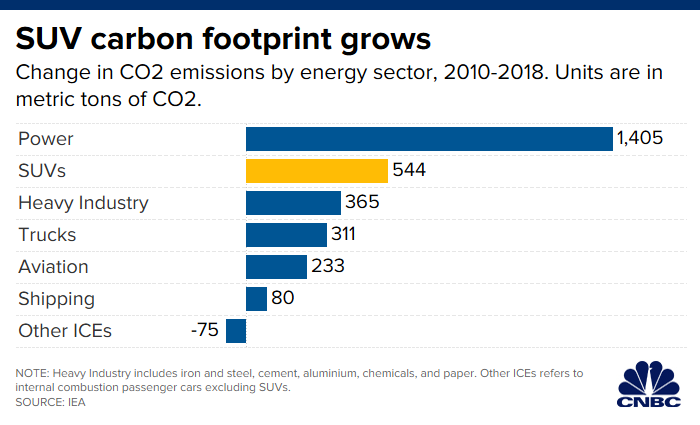 The surge in popularity is having a big impact on the environment since SUVs are less fuel-efficient than their smaller counterparts.

From 2010 – 2018, SUVs were the second-largest contributor to the global increase in carbon emissions behind the power sector, the study found. This places SUVs ahead of trucks and aviation in terms of carbon footprint. The study also found that 100% of the increase in demand for oil for passenger cars was driven by the popularity of larger vehicles.

“If consumers’ appetite for SUVs continues to grow at a similar pace seen in the last decade, SUVs would add nearly 2 million barrels a day in global oil demand by 2040, offsetting the savings from nearly 150 million electric cars,” the researchers found.

48% of car sales in the United States last year were SUVs, which was the highest percentage worldwide, but other countries are catching up. Large cars can be seen as a status symbol, and sales are rising in countries like China and India where the middle class is growing.

The shift towards bigger, less fuel-efficient cars is somewhat at odds with the auto market generally, where heavy R&D spending is fueling developments in energy-efficient vehicles.

Given the advancements in electric vehicles, as well as the knowledge that SUVs are less fuel-efficient, the researchers called the growing number of larger cars and the impact on global emissions “nothing short of surprising.”