One major cluster of data shows the U.S. economy is doing well despite concerns of a potential recession.

The hard data, which refers to actual numbers about the economy such as unemployment and retail sales, continue to reflect economic strength.

The U.S. unemployment rate fell to a 50-year low in September while retail sales grew more than expected in August. However, stocks have struggled in recent months amid disappointing soft data, which includes corporate and consumer sentiment surveys as well as purchasing managers’ index (PMI) numbers.

Soft data is often seen as a leading indicator for the economy and the recent batch has stoked fears of a recession as the U.S.-China trade war drags on. But those fears may be overblown as the hard data shows the U.S. economy remains strong.

“While the survey data have been steadily disappointing expectations, hard data have been a source of positive surprises,” said Doug Peta, chief U.S. investment strategist at BCA Research, in a note. “The labor market remains vibrant enough to exert downward pressure on the unemployment rate, and services continue to expand despite the contraction in manufacturing, both here and abroad. The expansion has slowed, but it’s not finished yet.”

The Bureau of Labor Statistics said Friday that the U.S. unemployment rate dropped to 3.5% in September, its lowest level since December 1969. The rate dropped even as the pace of U.S. jobs growth slowed last month. Nonfarm payrolls expanded by 136,000 last month, down from 168,000 in August.

The U.S. consumer is also in a solid place. Retail sales rose 0.4% in August, topping a Dow Jones estimate of 0.2%. The better-than-expected retail sales increase came after a 0.8% jump in July.

But despite the solid hard data, the major stock indexes are all down over the past three months as weak soft data has raised concern over the economy moving forward. The Dow Jones Industrial Average and S&P 500 are both down more than 1% in that time. Meanwhile, the Nasdaq Composite has lost more than 2%.

Meanwhile, the University of Michigan’s Surveys of Consumers said last month that a near-record number of consumers are worried about the U.S.-China trade war. A survey released Monday by the National Association of Business Economics respondents expect the U.S. economy to grow by less than 2% next year as the trade war rages on. That would be the slowest pace for U.S. economic growth since 2016. 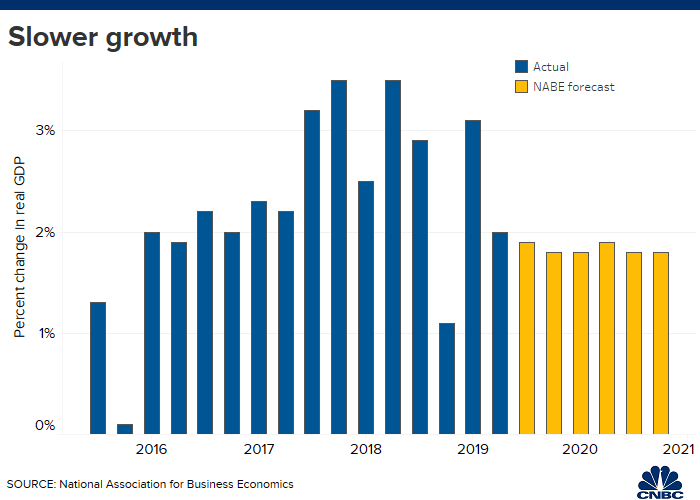 Jan Hatzius, chief economist at Goldman Sachs, said this divergence between the hard and soft data is “is the inverse of what we saw in the first 18 months of the Trump presidency.” He noted the hard U.S. data was lackluster in that time period while the soft numbers pointed to strong growth further down the road.

Equities performed well during President Donald Trump‘s first 1½ years in office. The S&P 500 advanced more than 23% in that time.

But “one reason to worry that history might not repeat itself is that the weakness in business sentiment dragging down the soft [data] reflects a rise in policy uncertainty that looks unlikely to go away anytime soon,” Hatzius said in a note, referring to the trade war.

U.S. and Chinese officials are set to meet later this week in Washington to try and get closer to a trade deal. Both countries have slapped tariffs on billions of dollars worth of their products since last year, dampening expectations for corporate profit and economic growth.

“Even so, there are good reasons to think that output and employment will continue to expand at a trend or slightly above-trend pace, and that worries about a recession will continue to prove too pessimistic,” Goldman’s Hatzius said.