Traders and financial professionals work on the floor of the New York Stock Exchange (NYSE) at the opening bell on October 3, 2019 in New York City.

An unusual trend in the stock market emerged recently as the latest sign that perhaps greed is the driving force behind the rally and investors are ignoring some key risks.

Wall Street’s “fear gauge” the Cboe Volatility Index, which typically trades inversely with stock prices, started moving in tandem at times with the S&P 500 earlier this month. The rolling 10-day correlation between the VIX and the S&P 500 turned positive on Nov. 14, the first time this has happened in six months, according to FactSet. 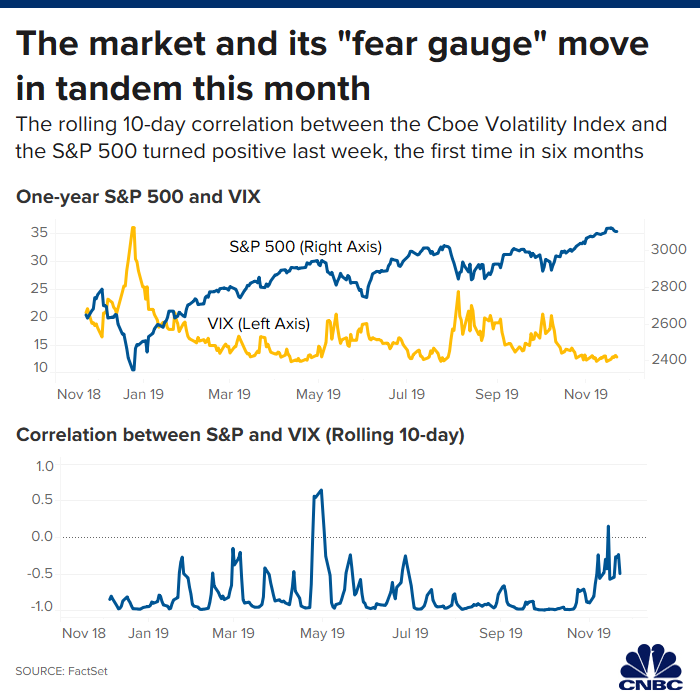 “When this correlation, and like many others recently, get out of whack would imply that something else is driving stock prices,” Roberto Friedlander, head of energy trading at Seaport Global, said in a note on Thursday.

The so-called VIX is a measure of the stock market’s 30-day expected volatility computed from the market prices of the call and put options on the S&P 500. When the market goes down, investors would want to purchase insurance, which drives up the prices of put options and increases the VIX. The VIX decreases when there’s less demand for put options as the market rises. That’s why it tends to move inversely to equities.

The fear gauge is also flirting with a two-year low, hovering around just 13 points, as investors cheer the record-setting rally, shrugging off a never-ending trade war and a heated impeachment probe into President Donald Trump.

The S&P 500’s strong performance this quarter has pushed its gains this year to nearly 25%, on pace for its biggest annual gain since 2013. While many believe the year-end rally was prompted by the so-called “phase one” trade deal, investors might have gotten too complacent, chasing the market higher for the fear of missing out.

“People are looking at the stock market that’s going straight up and it’s making them greedy,” Tom Essaye, founder of Sevens Report Research, said in an interview. “We’ve had a six-week rally where literally every piece of bad news is completely ignored and every whisper of possible good news causes a rally.” 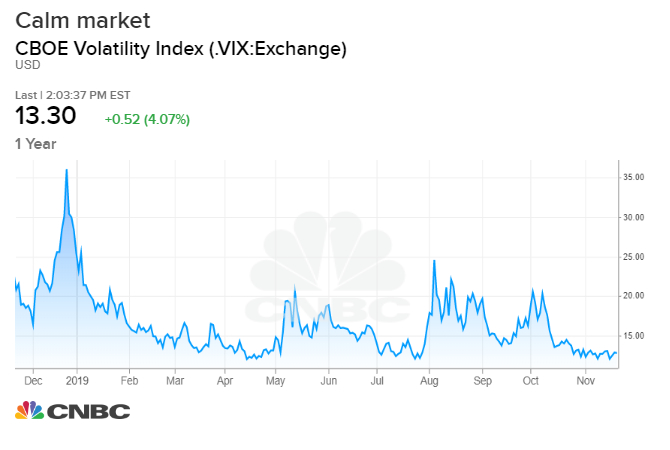 To be sure, the VIX tends to act strangely at the end of the year with accelerated options trading, according to Essaye. Therefore, the positive correlation could turn out to be very short-lived.

Still, negative news on China trade has done little to lift market volatility recently. On Wednesday of this week, the Dow Jones Industrial Average fell about 100 points on report that the completion of a limited trade deal won’t happen this year as China insists on more extensive tariff rollbacks. The VIX initially popped to about 14 when the headline hit, but actually finished the day lower.

Stocks surged to record highs last week after after White House economic advisor Larry Kudlow said the two countries were “getting close” to reaching a trade deal. Markets have been moving higher every time the Trump administration touts positive development on trade with China.

However, the peace may not last if the two sides call off the limited trade deal and the tariff war escalates, Essaye warned.

“If there’s not a China trade deal, you are going to see the S&P 500 go down 10% in a heartbeat,” Essaye said. “It’s going to fall fast. If the talks collapse this time, I think it’s reasonable to assume that nothing is going to happen until the election.”