Millennials — the selfie obsessed, avocado toast-loving generation — might be behind slower economic growth, according to a research note last week from Raymond James. This new generation, scarred by the financial crisis, is saving more than the free-spending boomers did before them, and it’s causing an economic imbalance.

According to data from the St. Louis Federal Reserve, the current U.S. personal savings rate, defined as income minus spending, is 8.1% as of August. By comparison, in 1996 the rate was 5.7%. 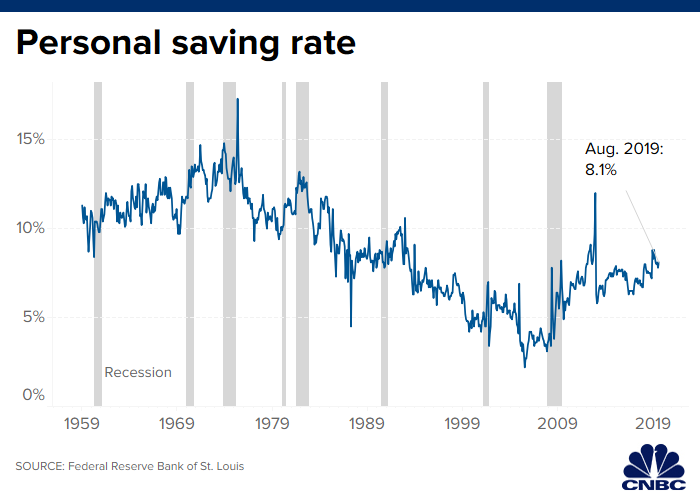 “The higher savings rate, we believe, has had disinflationary impact, driving the relatively slow growth and low inflation in this recovery … causing the incentives for excess supply, and disinflation/deflation biases in the global economy,” Raymond James analyst Tavis McCourt wrote in a note to clients Thursday.

One of the earliest financial lessons people learn is that saving early and often is key.

However, while saving is beneficial for individuals, a slowdown in spending hurts businesses and therefore the economy. Since the recession “supply increases have continued,” which coupled with a higher savings rate has led to “excess supply seemingly everywhere in the economy,” McCourt notes.

“This leads to frustratingly low growth, deflationary biases in prices, excess supply, and increasing debt from the supply side attempts to improve the situation because the savings rate is going higher,” he said.

McCourt chalks up the increase in savings to a “generational change.” Following the financial crisis, millennials began to save more, and this habit is becoming increasingly important as they replace “baby boomers as the primary income and spending generators.”

“The U.S. consumer has had enough, so they are saving instead of purchasing like last generation, limiting demand growth,” he said.

And it’s not only a problem in the United States. China also has a relatively high personal savings rate which hurts the global outlook given the size of the country’s economy and its rapid rate of growth.

“So, what we have is a global increase in personal savings rate, which has caused excessive supply increases globally [disproportionally in China], and U.S. consumers wanting to save more [to be less insane than the last decade], which makes trade deficits less severe than they would be otherwise, growth to be slower than expected for both economies, and inflation to be lower than what it would be otherwise,” McCourt explained.

While the U.S. personal savings rate might be rising, the national savings rate as a percentage of Gross Domestic Product was around 18% as of 2016, according to data compiled by the IMF. By comparison, Great Britain’s rate was around 13%, while Japan and China’s were 27%, and 46%, respectively.

– CNBC’s Michael Bloom and Tom Franck contributed to this report.