President Donald Trump meets with China’s President Xi Jinping at the start of their bilateral meeting at the G20 leaders summit in Osaka, Japan, June 29, 2019.

A slimmed-down trade deal, stalled talks and a “fluid” situation are just some of the conflicting reports that have surfaced this week as the U.S.-China trade talks officially kicked off on Thursday. For investors reading the tea leaves of every trade headline, things can get confusing.

But there are certain stocks investors should focus on over the next two days as the true “tell” on whether talks are making any progress.

The index includes the typical trade bellwethers Apple, Nike and Caterpillar and also contains many retail names such as Best Buy, Kohl’s, Honeywell.

The gauge is having a wild week as companies move in tandem along with trade headlines. Most recently, it jumped 2% after President Donald Trump said he’s meeting with Chinese Vice Premier Liu He on Friday, renewing hopes for a trade resolution. Member stocks including Kohl’s, Emerson Electric and Caterpillar popped 2% on Thursday following Trump’s comment. 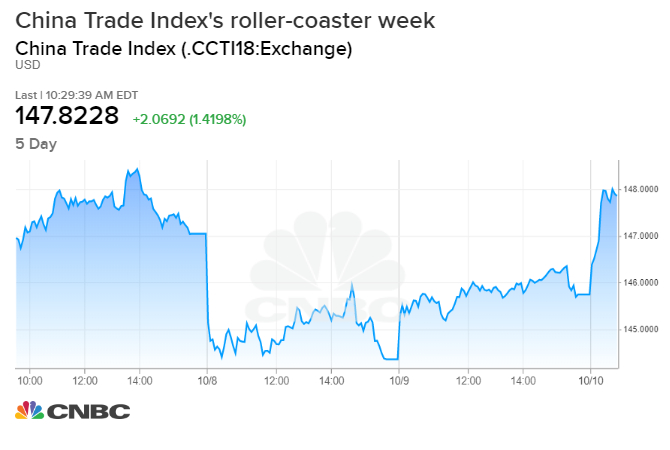 Earlier in the week on Tuesday, the index plunged as tensions intensified after the U.S. blacklisted 28 Chinese entities over alleged human rights violations against Muslim minorities in Xinjiang, while putting visa restrictions on Chinese officials involved. China responded “stay tuned” for retaliation against the blacklist.

All eyes are on Thursday’s high-stakes negotiations as the U.S. and China go head to head on trade. Stocks already had a wild ride Wednesday night after a slew of contrasting reports sparked volatile overnight trading.

Goldman Sachs screened Russell-1000 Index member companies for those with high revenue exposure to Greater China, using 2018 company filings. These stocks will be very sensitive to any signs the trade talks this week are going well or poorly. 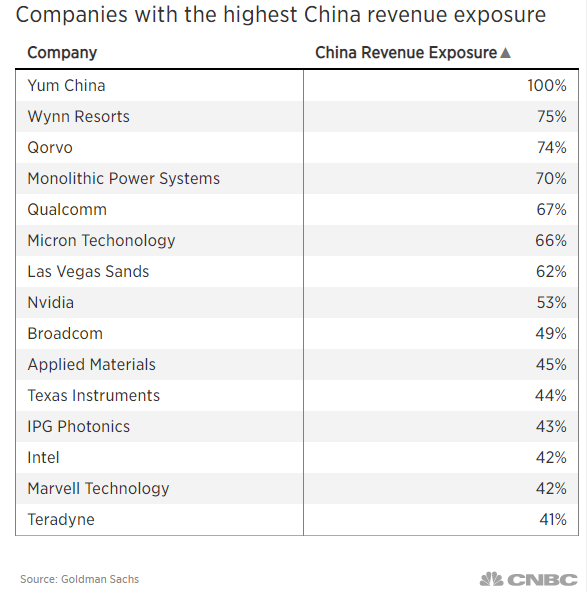 The list is concentrated in chipmakers including Qorvo, Qualcomm, Micron Technology, Nvidia, Broadcom and Intel. Semiconductors are already under pressure after the Trump administration blacklisted Chinese telecom giant Huawei, a big customer of U.S.-made chips.

The YUM! spin-off Yum China has 100% of its sales from China, and its stock has tanked 8.4% in the last three months. Casinos Wynn Resorts and Las Vegas Sands are heavily relying on their revenue in China, which have seen their stocks falling 26% and 17.7% respectively.