AQR Capital founder Cliff Asness says it’s time to “sin” a little — and by that he means increase allocation toward value stocks.

For years Asness, whose quant fund takes a factor-based approach to investing, has cautioned against betting on value stocks. The assertive hedge fund billionaire also preaches against trying to market time. But on Thursday he said that while value stocks have been under pressure for ten years, the last two years have not been justified and it may be time to buy some more.

“We think the first eight-plus years of value’s recent 10-year losing streak were ‘rational’ (for want of a better word) … In contrast, the last almost two years have seen value lose for ‘irrational’ reasons. Value fundamentals have not come in worse over this recent painful period, it’s prices alone that have gone the wrong way,” he said in a blog post.

Essentially he means that for the last two years investor sentiment has driven the downturn in value rather than a breakdown in fundamentals. Value has been “on the outs” with investors.

He said that AQR Capital, which oversees $185 billion, evaluated value stocks from a number of perspectives, with the conclusion always suggesting that “value is currently quite cheap compared to history.” He also doesn’t think it’s overbought at this point since for the large part value remains “shunned” and “out-of-favor.”

Value investing is a tried and true method of stock picking where the buyer evaluates the fundamentals of a company. If the market is pricing the security below what the investor has deemed to be the company’s intrinsic value, then the stock is a buying opportunity. Berkshire Hathaway’s Warren Buffett is one of the most well-known value investors.

But in recent years the boom in technology names has driven investors to prioritize growth stocks, which means value stocks have somewhat fallen out of favor. 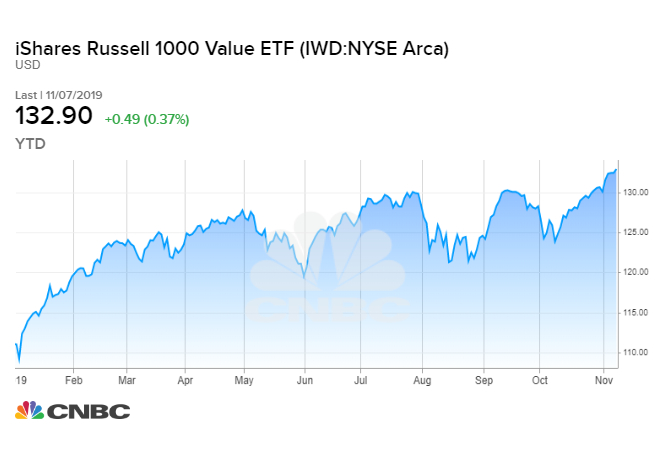 One of the tenets of Asness’ investing style is that timing the market is difficult, and so investors should only ever commit this “sin” during reasonably extreme events. And he says now is such a time. Investors shouldn’t wait until value stocks hit March of 2000 levels, which Asness called a “looney tunes” time.

“If you believe, as we do, that value is a good long-term strategy, and an important part (not all) of an investment process, we would recommend a modest extra amount of value than the norm. To the skeptics we would ask ‘if not now, when?’ If the answer is ‘only when it’s as bad as the tech bubble’ we just think you’re making the wrong call,” he said.

Asness does not make any specific stock recommendations.

One popular exchange-traded fund focused on value stocks is the Vanguard Value ETF (VTV). The fund is up 18% this year, below the 23% gain for the S&P 500. However its performance is improving as of late, up 7.8% in the last one month, better than the S&P 500’s 6.6% gain. The ETFs largest holdings are Berkshire Hathaway, J.P. Morgan Chase and Johnson & Johnson.