A man takes a photograph of a stock board inside the Tokyo Stock Exchange (TSE), operated by Japan Exchange Group Inc. (JPX), in Tokyo, Japan, on Monday, March 11, 2019.

U.S. equities have been the best place to invest during the past 10 years, but that dominance could shift in 2020.

Several investors and strategists are betting on international stocks outperforming the U.S. in the new year, something that has only happened twice since 2010. U.S. stocks have blown their international counterparts out of the water in that time. 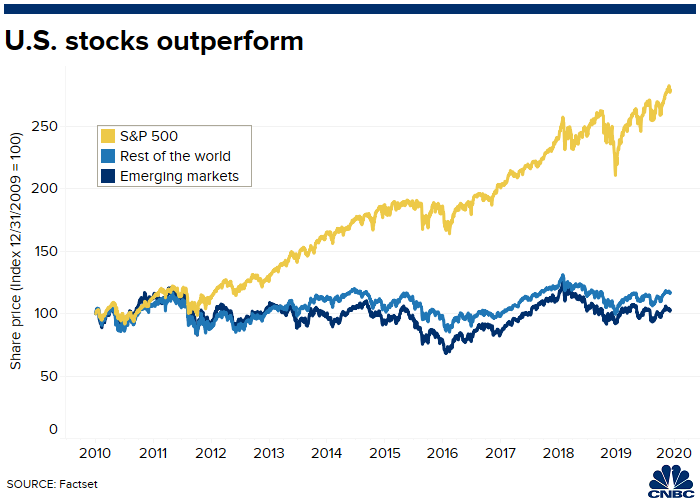 However, market experts think international stocks are poised for a comeback in 2020 versus the U.S. due to attractive valuations and a potential trough in global economic growth as world central banks take up more stimulative measures.

“Having underperformed for more than ten years, non-US stocks are set to gain the upper hand over their US peers,” Peter Berezin, chief global strategist at BCA Research, said in a note. “A reacceleration in global growth, a weaker US dollar, and favorable valuations should all support non-US stocks next year.”

International stocks, however, are trading at a much lower valuation. Through Friday’s close, the ACWI fund’s price-to-earnings ratio rested around 14.7.

Callum Thomas, head of research at Topdown Charts, notes there is a “50% valuation gap” between U.S. and international stocks. “Yes global ex-US has its problems, but are they 50% discount problems? At a certain point if the valuation gap is wide enough it kind of starts to speak for itself,” he said in a note.

This wide valuation gap comes as global economic growth has slowed down while the U.S. economy keeps humming. Last week, the Commerce Department said U.S. GDP expanded by 2.1% in the third quarter.

Economies around the world, meanwhile, have been stuck in the mud as manufacturing activity falls and trade conditions tighten.

In Europe, manufacturing activity hit a seven-year low in October. It rebounded slightly in November but remained in contraction territory, data from IHS Markit showed.

On the trade front, the U.S.-China conflict continues as both sides try to sign a so-called phase one deal. President Donald Trump also said Monday the U.S. will restore tariffs on metal imports from Brazil and Argentina.

These factors, however, have led global central banks to ease monetary policy. The European Central Bank launched a new bond-buying program earlier this year. The People’s Bank of China lowered its short-term funding rate for the first time since 2015 last month, and the Bank of Japan has kept monetary policy easy throughout 2019.

The trade tensions between China and the U.S. have eased slightly in recent months as both sides show they are willing to reach some sort of deal. These moves could spur a resurgence in global economic growth, which would “disproportionately benefit” international stocks relative to the U.S., BCA’s Berezin said.

“The sector composition of international stocks is more skewed towards cyclicals than defensives compared to US stocks,” Berezin said. “As a result, non-US stocks generally outperform their US peers when global growth accelerates.”

To be sure, global stocks may be pricing in these scenarios already.

Mike Wilson, chief U.S. equity strategy at Morgan Stanley, said the MSCI All-Country World Index — which measures the performance of global stocks including the U.S. — has already produced returns that are “meaningfully higher” since hitting its December 2018 lows.

“That is consistent with a bottoming in global economic growth, meaning that markets are sending a signal about the turn in growth and pricing it in many cases,” Wilson said.

What to buy overseas

Wilson recommends investors buy into Japanese and Korean stocks in 2020. He also has an underweight rating on U.S. stocks heading into next year.

Korean stocks, however, have not fared nearly as well this year. The iShares MSCI South Korea ETF (EWY) is down more than 2% for 2019, and the main stock index, the Kospi, is barely up year to date.

Europe is another international market eyed by experts heading into 2020. Stocks in the continent are on pace for their biggest annual gain since 2009, when they surged 28%. The Stoxx 600 index, which tracks a broad number of European stocks, is up 19.3% in 2019.

Cameron Brandt, director of research at EPFR, said money flows into European assets are “certainly indicating that all the bad news in Europe has been priced in.”

“Given that the ECB is back in full backstop mode, and that Europe has a lot of dry powder in terms of fiscal stimulus … it’s probably fair to say the greatest potential for upside next year may be in Europe,” Brandt said.

Within Europe, one market that could see further upside in 2020 is Germany, said Nuveen’s Brian Nick. The German Dax has rallied more than 20% in 2019 and is headed for its biggest one-year gain since 2013.

“If we get a stabilization in growth in 2020, the internationally oriented countries should do a bit better, especially if China looks a little more solid as it seems to,” the firm’s chief investment strategist said. “Those two economies are more closely tied together than the U.S. is to either of those.”

Buy international for the new decade?

Investors could also benefit from making a long-term bet on international stocks after the 2010s were dominated by the U.S.

John Davi, chief investment officer at Astoria Portfolio Advisors, thinks overseas equities can outperform over the new decade after lagging the U.S. for so long.

“In the last 10 years you’ve had this incredible run of the U.S. over the rest of the world. I think that’s going to shift over the next 10 years,” he said. “At the end of 2020, I think we’re going to have a much different decade-long return for U.S. versus international.”