Berkshire Hathaway’s cash hoard keeps growing, topping $128 billion according to the company’s latest SEC filing. Now, we finally have an idea of what Warren Buffett has been thinking of doing with some of that money.

In a little-noticed announcement late Wednesday, Tech Data said it has agreed to be bought by private-equity firm Apollo Global Management for $145 a share, which values the tech company at about $5.14 billion, excluding debt. The deal was sweetened from Apollo’s previous bid of $130 a share, or just over $4.77 billion, after an unnamed suitor topped Apollo’s original offer.

The undisclosed competing suitor was none other than Berkshire Hathaway, CNBC has learned exclusively. Berkshire Chairman and CEO Warren Buffett said a week ago he bid $140 a share, or just over $5 billion excluding debt, for Tech Data.

Apollo’s latest offer topped Buffett’s bid, and was accepted by Tech Data as the better offer. Buffett said he does not intend to make a higher offer. 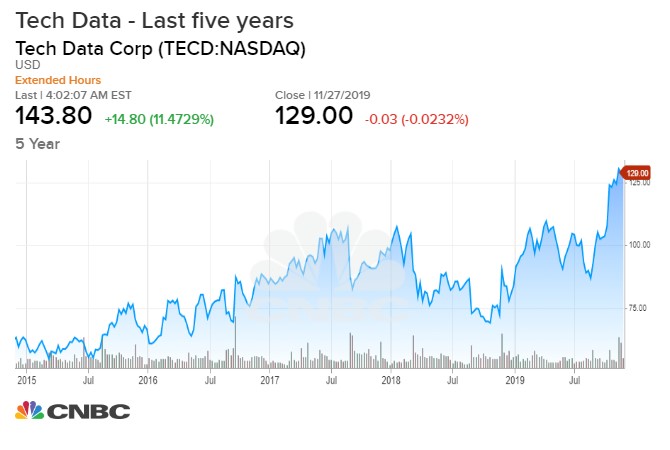 Tech Data is a global distributor of technology products and services. It supplies small companies with technology software and hardware made by large technology companies. It had $37 billion in revenue last year. About 16% of its sales come from Apple products, while products from Cisco and Hewlett Packard Enterprise make up about 11% each.

Tech Data currently has a market cap of $4.5 billion, and is trading at an all-time high. Its shares rose after the first bid from Apollo was made public. As part of the original deal with Apollo, Tech Data had a go-shop provision until Dec. 9, meaning another bidder could still come in with a higher offer before that date.

Buffett is not known for paying hefty premiums for his deals. In fact, some might even call him cheap. He’s also commented in recent years that the premium for buying companies outright has gotten too rich, because there is so much liquidity in the markets, and competition from private-equity companies and other players has pushed prices to extremes.

But when Bank of America brought the go-shop provision from Apollo’s deal with Tech Data deal to his attention, he quickly swung into action.

Bank of America called Todd Combs, one of Berkshire investment managers, on Nov. 19.

By the next day, Buffett had decided he would be willing to offer up to $140 a share for the company, besting Apollo’s offer of $130 a share.

Two days after that, Berkshire Vice Chairman Greg Abel traveled to Clearwater, Florida, to meet with Tech Data management. The next day, Saturday, Berkshire formally made the offer of $140 a share for the company, streamlining the process by simply borrowing Apollo’s existing contract for Tech Data in large part, amending it only in a few areas, and on terms that would benefit Tech Data.

On Sunday evening, the Tech Data board approved Berkshire’s offer as a superior deal to Apollo’s original deal.

But by Wednesday, Apollo sweetened its offer to $145 a share, and Buffett bowed out of the bidding war.