There are a number of big companies set to report earnings next week, but there are five key names that investors should be focused on since these companies almost always beat the Street. 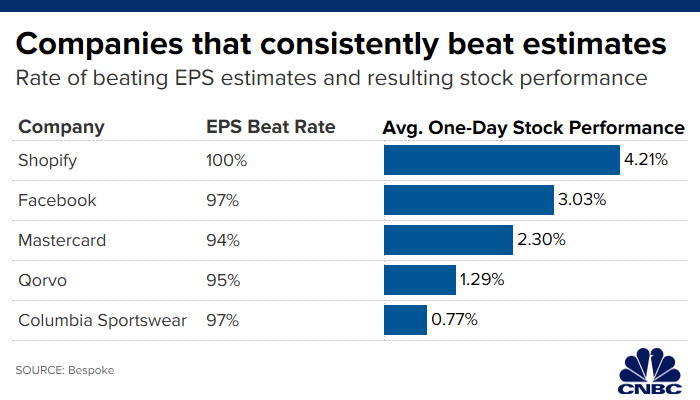 Facebook reports third quarter earnings after the close on Wednesday, and if history is any indication there’s a good chance the company will beat expectations.

Shares of the tech giant have surged 44% this year, handily outperforming the broader market’s 21% gain. But the company has been caught in Washington’s crosshairs over the last few months, and Facebook shares are trading about 10% below the July all-time level.

Analysts polled by FactSet are expecting the company to report earnings per share of $1.91 and $17.37 billion in revenue. The revenue estimate is about 27% higher than the $13.73 billion the company posted for revenue in the same quarter a year earlier.

Facebook might be facing regulatory headwinds, but the Street remains bullish on the name. Estimates compiled by FactSet show that 42 analysts have a buy rating on the stock. 5 have a hold rating, and only one analyst — from Societe Generale — says to sell.

“We believe the Company continues to drive solid growth in total ad volume with like-for-like pricing trends that remain positive. We believe demand for Stories ads continues to grow, and is being aided by an increasing use of Facebook’s publisher automation system. We believe this tool helps balance inventory demand across the platform, which helps increase returns for advertisers and opens up more budgets,” KeyBanc analyst Andy Hargreaves wrote in a note to clients. He’s predicting earnings of $1.88 per share for the quarter, and $17.378 in revenue.

James Lee from Mizuho said the stock is one of his top picks in the US internet space, but that potentially light guidance could pressure shares after earnings are released. “We would be buyers on any weakness post-guidance,” he said. 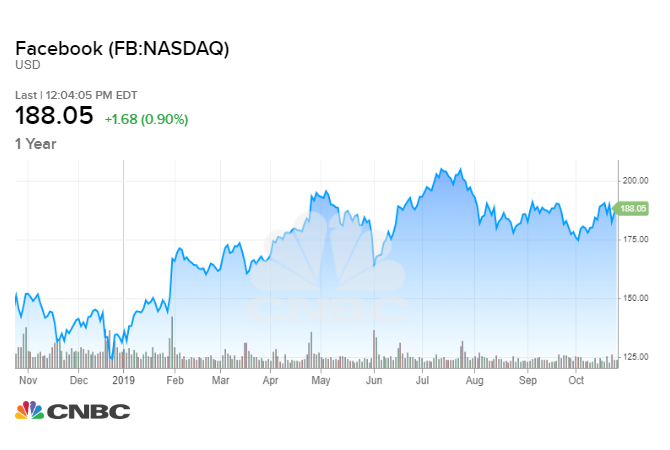 E-commerce company Shopify reports on Tuesday before the bell, and Bespoke found that the company has topped estimates in every single one of its quarterly reports. The company is, however, relatively young after going public in May of 2015.

Shares have sky rocketed 129% this year, although the stock is currently trading in a bear market after slipping 22% from its August all-time high.

Wedbush analyst Ygal Arounian said that while the decline probably isn’t based on deteriorating fundamentals, downward pressure could continue. “Despite our expectation for another beat and raise, shares may struggle to break out of this range as software sentiment remains weak and SHOP’s multiple is still at a premium to its peer set,” he wrote in a note to clients. He has a neutral rating on the stock, and a $325 target.

Analysts are expecting EPS of $0.11 and $383.7 million in revenue, according to estimates from FactSet. The revenue figure represents a 42% increase from what the company reported in the same quarter a year earlier. 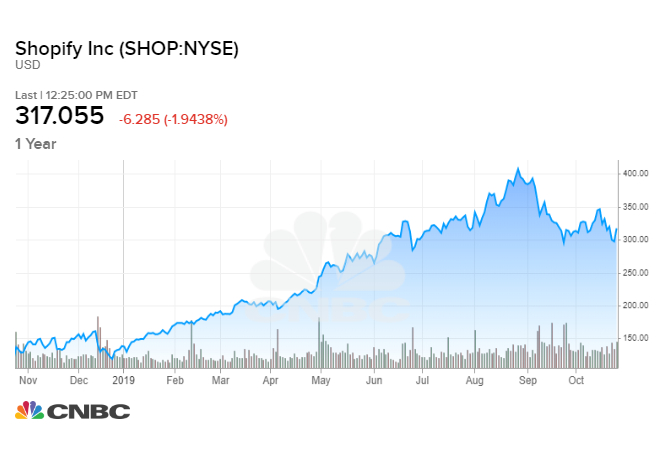 Columbia Sportswear reports third quarter earnings after the close on Wednesday, and tops EPS estimates 97% of the time, Bespoke found.

“The company continues to diversify its revenue stream to less cold weather-dependent categories while augmenting growth with new technologies. Key regions should return to growth and accelerate profitability while brands gain additional relevance/market share in US channels of distribution,” he said. He has an outperform rating on the stock and his $126 target implies 34% upside ahead.

His earnings estimate of $1.55 is in-line with the Street’s numbers, according to FactSet, while his $882.4 million revenue target is slightly below the $884.3 million consensus.

Chipmaker and Apple supplier Qorvo reports on Thursday after the close, and beats estimates 95% of the time Bespoke numbers sho. According to FactSet analysts are expecting earnings of $1.30 and $754.7 million in revenue.

Needham’s Rajvindra Gill is expecting the company to report EPS of $1.28 on $750.7 million in revenue. Earlier this month he cut his full-year estimates for 2020 and 2021 based on the company’s exposure to Huawei. However, Gill expects the company to return to growth in 2021 as Samsung and Apple roll out their 5G phones. He therefore has a buy rating and $90 target on the stock, which is about 14% higher than where it traded on Friday. 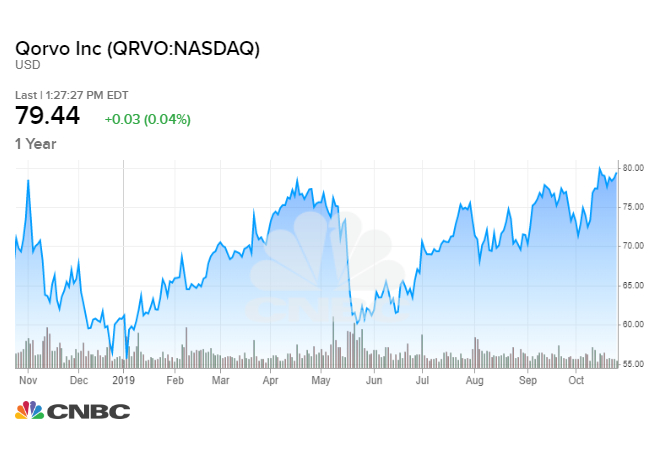 Mastercard reports Tuesday before the market opens. The Street consensus is EPS of $2.01 and $4.43 billion in revenue, according to estimates from FactSet. Bespoke found that 94% of the time the company reports bottom-line numbers above consensus.

Ahead of the company’s third quarter results Cantor Fitzgerald raised its target on the stock to $315 based on new markets for the company.

“Our rating is based on the company’s ability to grow faster than its peers and on its
potential to expand margins. We expect continued double-digit revenue growth of 13.8%,” analyst Joseph Foresi wrote in a note on Tuesday. He has an overweight rating on the stock, although his EPS estimates of $1.97 for the quarter is slightly below consensus.

Competitor Visa beat top and bottom line estimates when it reported quarterly results on Wednesday. The company said payment volumes grew 9%, and also announced that it was hiking its dividend by 20%. 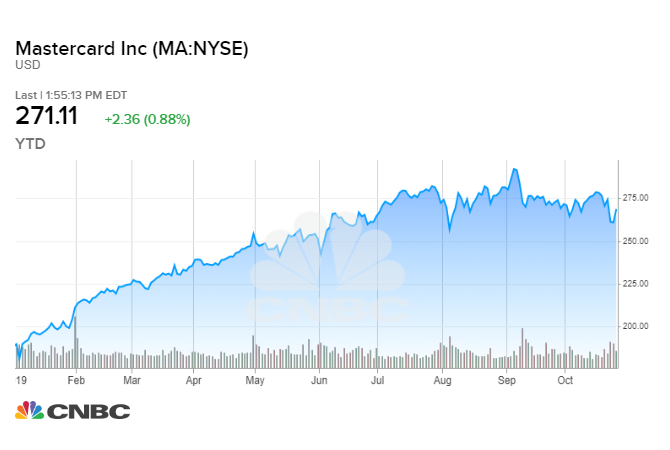