Campaign manager Roger Lau said he’s happy that Wall Street bankers are “scowling into their catered breakfast,” but investment managers have been left wondering how they’ll bring home the bacon if Warren comes out on top.

Dozens of brokerages and market research firms have in recent weeks reached out to clients with ways to try to capitalize on a Warren election. And the consensus isn’t good for the stock market.

Most highlighted Warren’s distrust of Wall Street and corporate governance, a view many felt would lead to heightened regulation, muted earnings and an increase in government intervention if she wins in 2020.

While some areas of the market — like renewable energy companies — could see an uptick in business, many more feared that profits could take a hit across the U.S. economy.

Some, like Tom Essaye, founder of Sevens Report Research, took the opportunity to assess how each of Warren’s policy priorities could mean for corporate earnings and citizens of various income levels.

“It is a very reasonable statement that if Warren were elected, and these policies were enacted, it would be negative for the stock market in the extreme, because share prices are an expectation of future earnings,” Essaye wrote on Oct. 8.

“These policies would hurt corporate earnings universally, although they would likely improve quality of life for many demographics at the expense of corporate profits,” he added. “Whether that trade off is positive, or negative, I’ll leave you to decide.”

Mark Zuckerberg, chief executive officer and founder of Facebook Inc., listens during a joint hearing of the Senate Judiciary and Commerce Committees in Washington, D.C., U.S., on Tuesday, April 10, 2018.

Three sectors were of particular concern to Wall Street’s top stock strategists: drugmakers, energy and financials. Warren has historically bashed theses industries for what she views as a chokehold on health care, impact on the environment or underhanded lending practices, respectively.

CNBC compiled reports from several of Wall Street’s stock analysts and created a list of equities investors should watch if the Massachusetts senator’s polling numbers continue to creep higher.

As Bank of America’s Subramanian writes, there’s perhaps no industry in greater jeopardy under a Warren administration than health care.

She is a fierce supporter of Medicare for All, an idea embraced by nearly half of the current the 2020 Democratic field. The proposals would put Uncle Sam in charge of providing health insurance for practically all Americans. Warren has also explicitly supported an end to private health insurance plans under her health-care plan.

Being banned by the U.S. government tends to put a damper on business, but major drugmakers like Johnston & Johnson could also feel the heat.

She’s already pledged to no longer take large contributions from pharmaceutical executives and she recently proposed legislation to combat the opioid crisis financed by rolling back “just a fraction” of tax cuts that benefited drugmakers she says “played such a key role in creating this crisis.” 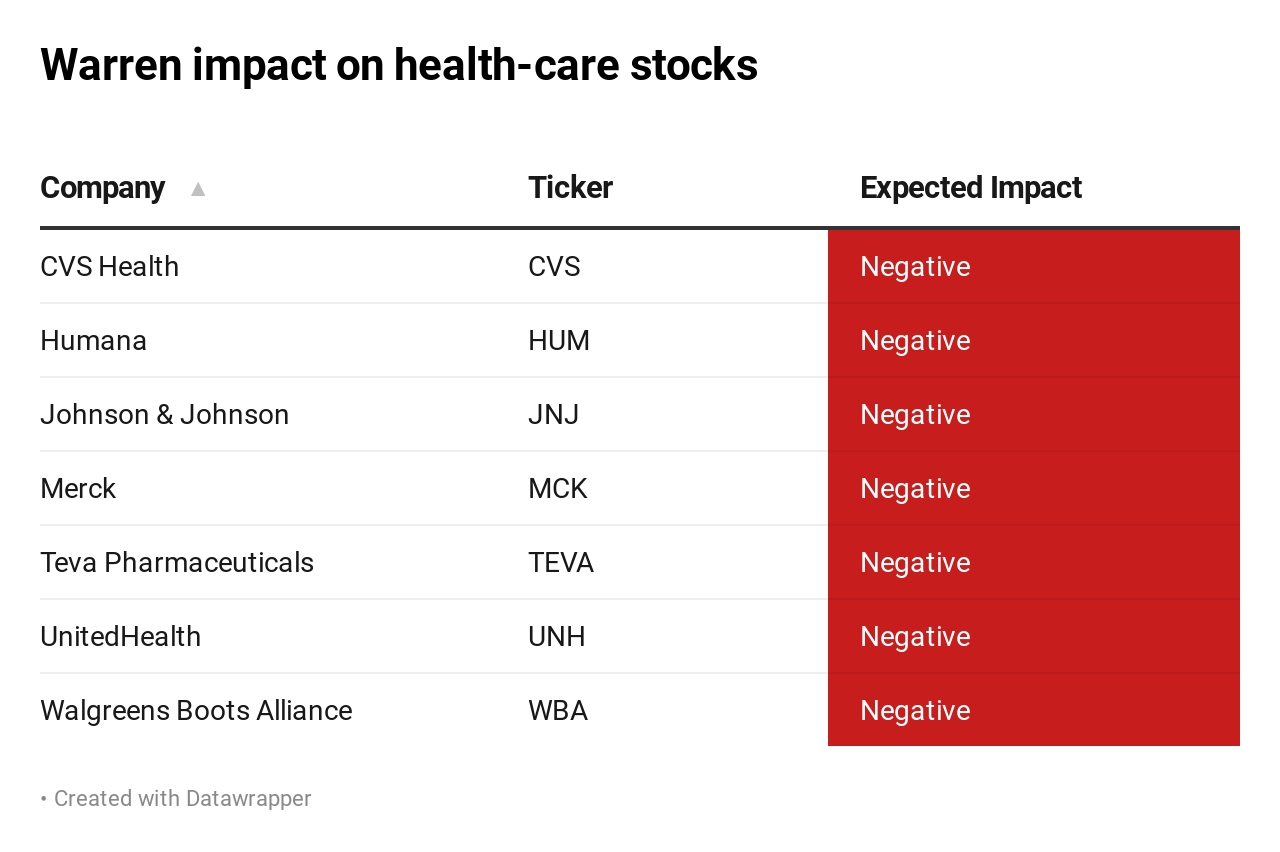 Warren has a long and storied relationship with Wall Street’s big banks and private equity firms.

Given her frequent criticism of the nation’s largest banks, private equity, and other financial institutions, a Warren presidency would likely mean more regulation for the group, wrote Oppenheimer bank analyst Chris Kotowski.

“She is clearly portraying private equity managers as the axis of evil in the American economy, never mind the fact that they employ millions of people, that most private equity investments are relatively successful and that some of the biggest beneficiaries of their outstanding performance over time have been public pension funds and charitable endowments,” he wrote on Oct. 8. 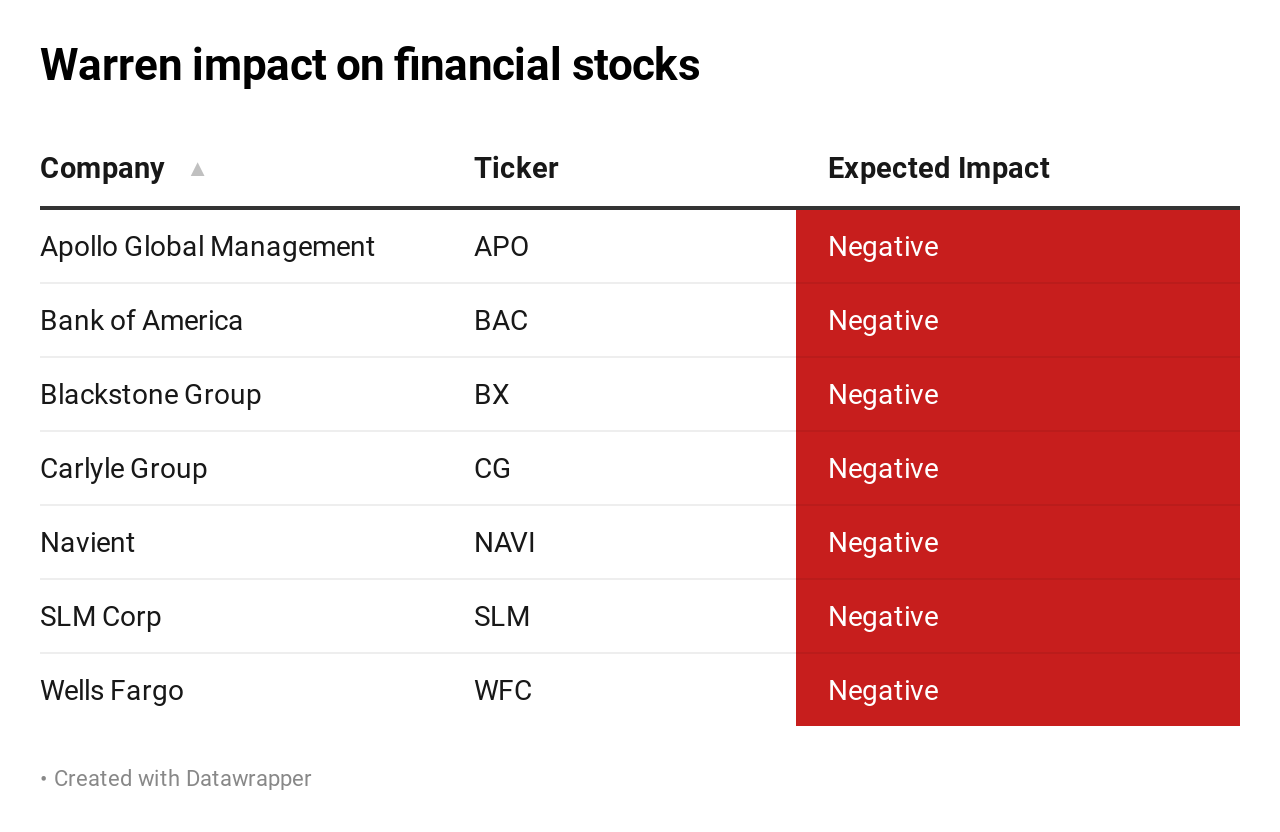 Warren in September rolled out an even more articulate plan to curtail U.S. emissions and reliance on fossil fuels. Though she’d already endorsed the Green New Deal, a broad proposal that seeks to curb fossil fuel consumption in the U.S., the senator said her $1 trillion plan would be funded by reversing the 2017 GOP tax cut.

Her plans for a total block on hydraulic fracturing (i.e., “fracking”) would likely require the help of Congress, a tall order even if she does manage to win the White House. CNBC took a deeper dive into how Warren’s election could impact the energy sector.

A crackdown on big oil, however, could actually be a boon to the companies Warren hopes to limit, so trying to speculate on the direction of future stocks moves is even trickier for the energy sector.

Imposing hurdles on petroleum production would very likely buoy oil, which has wallowed in bear market territory for much of 2019. Even if shares of Exxon Mobil and Chevron initially turn lower, any sustained rise in the price of oil could be a big win for the companies. 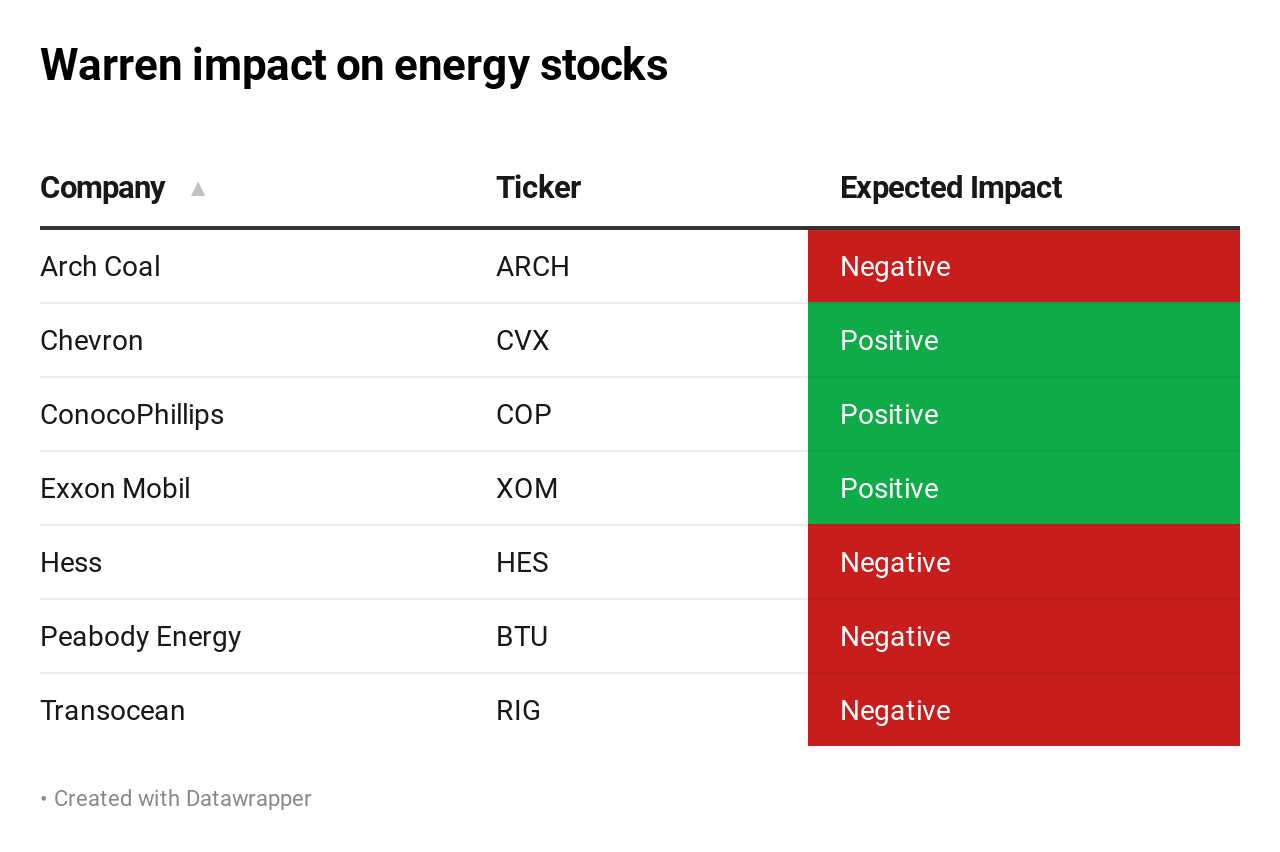 The Warren campaign isn’t a big fan of big tech. Her public spats with Facebook CEO Mark Zuckerberg, perhaps the most emblematic of her distrust of Silicon Valley, tend to reignite Wall Street’s concerns that a President Warren would push for anti-trust legislation and a tougher Justice Department.

Her campaign also put up a giant billboard in the heart of Silicon Valley calling for the breakup of Big Tech.

“They’ve bulldozed competition, used our private information for profit, and tilted the playing field against everyone else,” Warren wrote in March. “That’s why my administration will make big, structural changes to the tech sector to promote more competition — including breaking up Amazon, Facebook, and Google,” she added.

But Warren isn’t alone in her unease over tech as grilling Silicon Valley CEOs has become a rare area of bipartisanship. Major technology stocks would likely come under pressure under a Warren tenure. 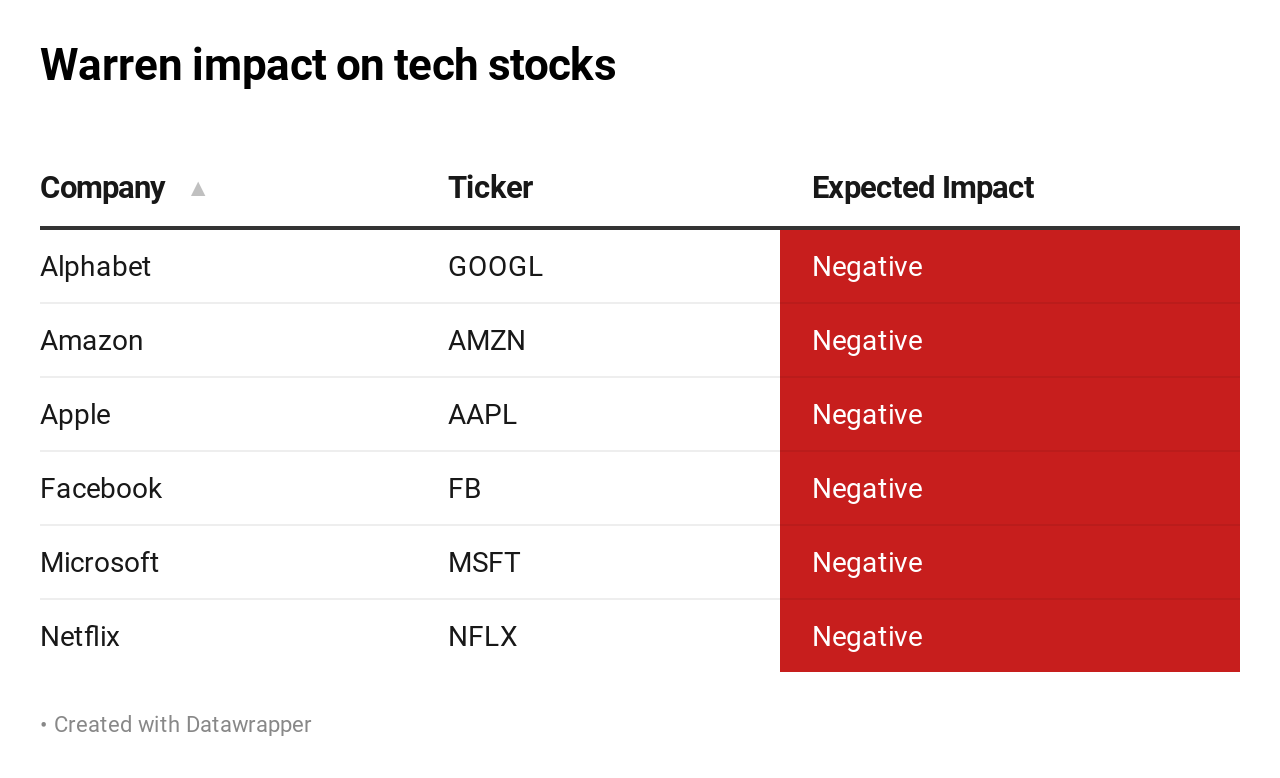 Though few and far between, some areas of the stock market could see a bump if Warren’s elected in 2020.

Her attacks on the fossil fuel industry, gunmakers and private prisons could bode well for a relatively new investment class on Wall Street known as environment, social and responsible (ESG).

Should the federal government expand subsidies to the renewable energy industry, companies that produce power through wind or solar could see relative upside.

On the flip side, gunmakers and firearm retailers like American Outdoor Brands could see gains capped if a Warren administration chooses to focus on background checks and barring assault weapons. The same could be said for operators of private prisons, opposed by the Warren campaign. 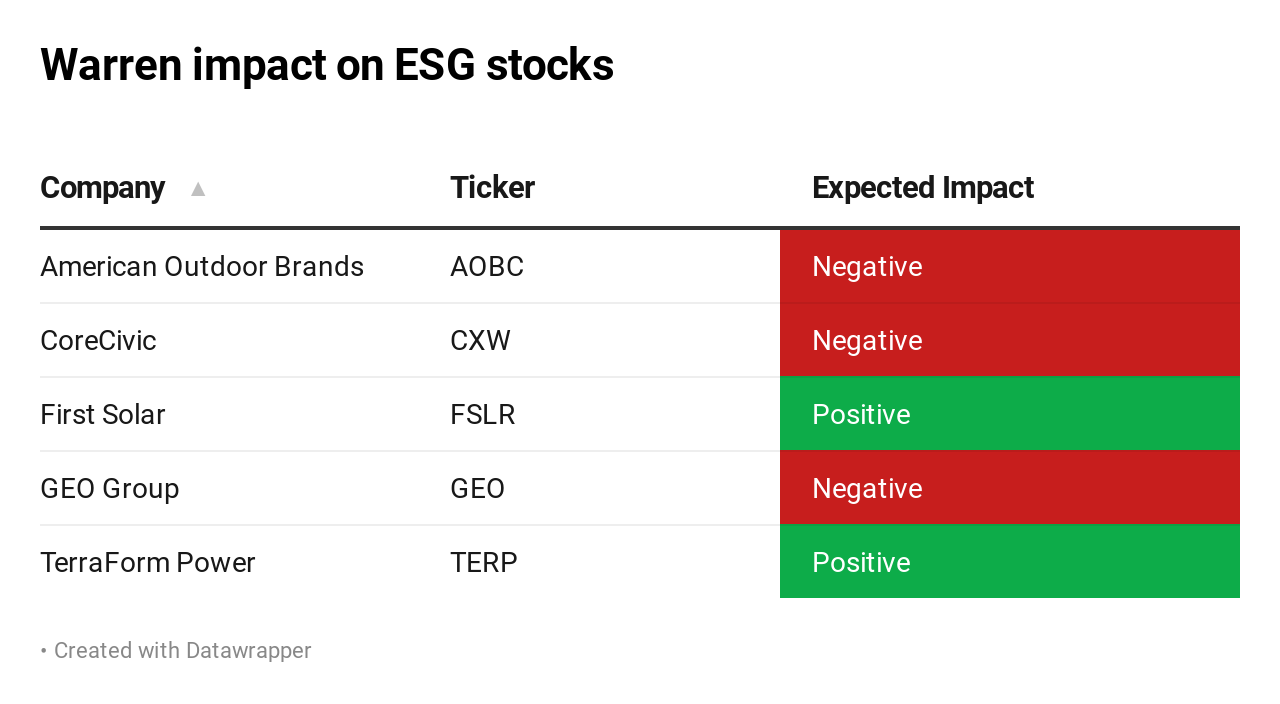